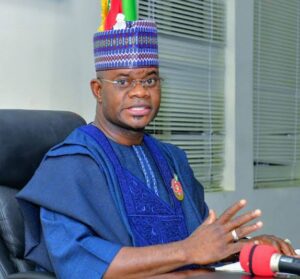 The Kogi Government has denied ownership of the N19.3 billion, allegedly returned to the Central Bank of Nigeria (CBN) by the EFCC.

The state has also threatened legal action, if the EFCC did not within 48 hours, retract the statement that the fund it allegedly returned to the CBN, belonged to Kogi.

The News Agency of Nigeria (NAN) recalls that the Economic and Financial Crimes Commission (EFCC) on Friday, said it returned the N19. 33 billion Kogi salary bailout funds it recovered, to the CBN.

Spokesperson for the EFCC, Mr Wilson Uwujaren, disclosed this in a statement in Abuja, on Friday.

“Let it be known that the Kogi government has disbursed its bailout loans for the purpose of which it was granted as of October 2019.

“There is therefore no hidden bailout funds/loan’ belonging to Kogi that is capable of being returned to the CBN or frozen by an order of Court.

“The EFCC knows this, which is why it withdrew the suit it filed in Court on the bailout fund,” he said.

YOU MAY ALSO LIKE:   When Last Did You Thank Your Wife After S3X- Nigerian Pastor Tackles Married men

The commissioner reiterated that the state does not operate a fixed deposit Sterling Bank account, which had been clarified by the bank in its letter, dated Sept. 1.

“The Kogi government knows absolutely nothing about the ownership and control of the said N19.3 billion, allegedly returned to the CBN.

“The Kogi government did not also open or operate a Kogi State salary bailout fixed deposit account, No. 0073572696, where the said funds were allegedly warehoused and dissipated and now allegedly returned to the CBN,” he said.

YOU MAY ALSO LIKE:   Fidelity Bank appoints Chike-Obi Chairman as Ebi retires

Fanwo challenged the EFCC to provide details of the fixed deposit account, as no one or group could operate such account without a mandate, an agreement as to terms including tenure, interest rates and the rest.

He said the whole saga was aimed at tarnishing the rising political image of Gov. Yahaya Bello, bring him to disrepute by portraying him as a corrupt governor/person.

“The EFCC must be mindful of how this issue will affect the fortunes of the state, shake investor confidence and the possibility of setting the people of Kogi against its government.

“We further demand an apology published within 48 hours from today, in one national daily and on all EFCC official and social media platforms, addressed to the governor and the entire government and people of Kogi.”

On EFCC’s claim that the sum of N666,666,666.64 was transferred from the N19.3 billion on the instruction of the Kogi government, the commissioner said that Sterling Bank had clarified that the account was not an operational account but was a mirror account opened for administrative purposes.

“We challenge the EFCC to produce the account mandate, account package, and the phone number and BVN of those who allegedly opened and operated the ‘Kogi State salary bailout fixed deposit account No. 0073572696’ on behalf of the state government.”

Fanwo said the EFCC should tell Nigerians who was drawing the interest from the said fixed deposit account and where same was being paid by Sterling Bank Plc. (NAN)