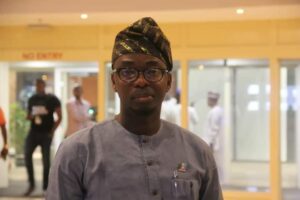 Prince Oladega Kehinde Ibrahim has indicated interest to vie for the vacant Kosofe Constituency 2 seat in the Lagos State House of Assembly, which became available following the demise of Honorable Tunde Buraimoh, who was representing the constituency.

Ladega, as he’s popular called made this known through an official statement signed by his publicist, Wole Adepoju.

The All Progressive Congress member ,  who has since started consultations said it was not his sole decision to put in for the race but a decision unequivocally made by the elders and those whose influence count, at his ancestral home, Agboyi in Agboyi Ketu Local Council Developmental Area (LCDA).

He further revealed the decision of the elders to push him forward to represent them at the Lagos Assembly, was borne out of the fact he’s known to have always striven to seek development for the area.

“ My people have always known and seen my zeal towards ensuring our place is not left out of the development Lagos state has  enjoyed under successive governments and as such they believe if I am at a place like the assembly to represent them, their interest will be well represented and protected’ he explained.

Also, Prince Oladega believes that, as a young man who is active, exposed, performance and result oriented, and as well over the years garnered experiences at the feet of late Senator Bayo Osinowo and the minister for interior, Ogbeni Rauf Aregbosola, he’s eminently qualified as a round peg in a round hole to take over from where late Hon. Buraimoh stopped, to help take Kosofe Constituency 2 and the state at large to the next level.