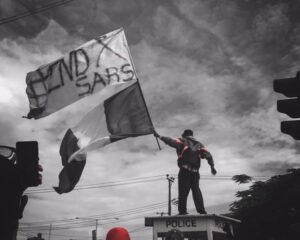 The High Court at the Olokuta Correctional Centre, Akure, Ondo state, on Monday refused to grant the 18-year-old, Kemisola Ogunniyi, who was arrested and detained during the #ENDSARS protest and gave birth in the prison custody bail as the Judge denied being aware of the bail application.

The trial judge, Justice Omolara Adejumo said she was not aware of the bail application by the Counsel to the defendant and she was returned to the correctional home.

While speaking on the development, Counsel to the Ogunniyi, Barrister Tope Temokun, expressed optimism that the teenager would be granted bail today, (Tuesday) saying every necessary procedure will be completed to ensure the release of the 18-year-old girl.

“There is nothing negative about this issue, the whole world knew that a boy was born and i am very sure that tomorrow, the whole world will also know the name of that boy. The boy has been announced to the world and am very confident that the boy is going to be great.

“But that is not to say that we should allow the naming ceremony to take place in prison. And we are fighting against that seriously.”

“We were fighting that Kemisola should not deliver in prison but she eventually delivered in prison, the noise was everywhere, so if we say we don’t want the naming ceremony in the prison custody.

It is still part of the agitation to get her released. But I must assure you that Kemisola will not spend additional day in the custody after delivery.

He expressed optimism that tomorrow, she would be granted bail because the naming ceremony is on Wednesday.

It would also be recalled that the state government had said it has begun the facilitation of the bail and release of Ogunniyi from prison custody.

While reacting, the state Attorney General and Commissioner for Justice, Mr Charles Titiloye, said the bail application for the defendant had procedure which the court must follow.

YOU MAY ALSO LIKE:   Breaking: Nigerian football coach kidnapped

Titiloye said “There are procedures for all court matters, it was a court order that put the person in the custody and the court order has to be followed in securing her bail . So Tuesday is not too late. We have to follow the court procedure,” the AG stated.

It will be recalled that young Kemisola was arrested with three others by the Ondo State police during the curfew imposed in Ondo in the state at the wake of the #EndSARS protest in October 2020.

They were accused of setting the APC secretariat ablaze during the protest.