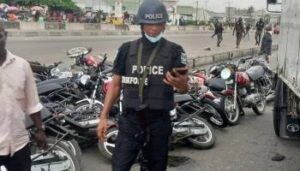 The Lagos State Government has inaugurated an anti-Okada squad to enforce the ban on commercial motorcycles in six LGAs and nine Local Council Development Areas (LCDAs).

The squad will join the police to maintain the ban in line with the Transport Sector Reform Law (TSRL) 2018.

The Commissioner for Transportation, Dr Frederic Oladeinde, explained that the anti-Okada squad would report to the police, and urged Lagosians to collaborate with the state government to combat the Okada menace across the state.

The Permanent Secretary, Ministry of Transportation, Mr Kamar Olowoshago, also urged the anti-Okada personnel to be diligent and honest in the discharge of their duties.