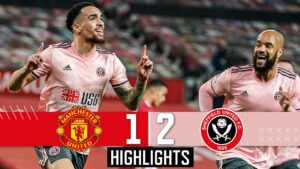 Ole Gunnar Solskjaer’s side needed three points to regain top spot from rivals Manchester City but were lacklustre for large periods of the contest as the away side picked up only their second win of the season.

The Blades took a shock first-half lead through Kean Bryan’s flicked header, which went in off the far post following John Fleck’s corner.

Anthony Martial had a goal ruled out as Harry Maguire was adjudged to have fouled Aaron Ramsdale, but the United skipper headed in the leveller just past the hour mark.

The visitors responded with 16 minutes remaining as Manchester United failed to clear and substitute Oliver Burke side-footed in via a deflection off Axel Tuanzebe for their first win over the home side since the opening day of the newly formed Premier League in 1992.

“It’s a long time to wait for a win at Old Trafford and it’s a special result, and a special performance,” said Blades boss Chris Wilder.

“I’m not saying an incredible escape is on but I want to show what we are about.”

On seven previous occasions this season, Solskjaer’s United had come from behind to win a league game and they looked on course to repeat the trick when Maguire headed in against his old club.

But recovering a deficit time and time again is unsustainable throughout a season and their luck finally ran out.

Unbeaten away from home this season, the Red Devils have dragged themselves into a surprise title challenge, with this their first defeat in 13 games since they lost at Old Trafford against Arsenal in November.

But it is their home form that is causing them the most harm – this is a fourth defeat at Old Trafford this season, following that loss to the Gunners, a hammering by Tottenham and a loss to Crystal Palace in their opening game.

And this damaging result will be a reality check for Solskjaer and his team, who were desperately poor throughout.

They failed to exert any real pressure on the Sheffield United backline and talisman Bruno Fernandes, so often the hero, has now hit a slump and gone four straight league games without a goal or an assist.

Marcus Rashford dragged an effort wide from the edge of the area early on and saw a long-range free-kick gathered by Aaron Ramsdale.

Mason Greenwood’s 25-yard drive straight was straight at the goalkeeper and Alex Telles’ shot looped on to the roof of the net but the strikes were all from long range and saves you would expect the keeper to make.

Edinson Cavani, impressive since joining on a free transfer last summer, was sent on after 66 minutes as the hosts chased a winner but ended up conceding.

With fellow title-chasers Leicester held to a 1-1 draw at Everton, United’s missed opportunity means Manchester City are in the ascendancy, a point clear at the top with a game in hand.