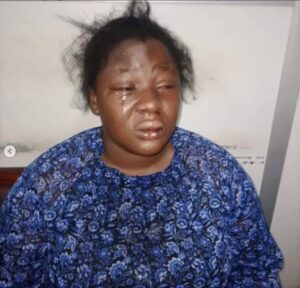 Adunni Ade, a practicing lawyer, has recounted how she was beaten and bruised after boarding a bus filled with robbers at GB Iyana Ipaja, Lagos State, Naija News reports
According to Adunni, who expressed gratitude for surviving the ordeal, the incident happened last Thursday.

Amongst the things that were stolen from her was her phones, other valuables, and money.

She added that the mini bus was on motion while the robbers battered her.

She said, “On Thursday evening 10/03/2022 at about 7:30pm or 8pm, let’s just say I got very unfortunate because I fell into the hands of the wicked beasts living among humans. I work at Yaba and I live in Ipaja just right after Iyana Ipaja.

“All the way from Yaba, I already got to Iyana Ipaja and I was already happy I had almost got home. Right in front of GB Iyana Ipaja was a mini bus calling Ipaja Ayobo, before me was a woman in her 60s, I guess.

“She entered the bus and then I hopped in right after her. We only just asked for the price of the vehicle(sic) and under split of seconds one of the supposed passengers from the back just came to the front and the next thing I heard was ‘blood of Jesus’, ‘blood of Jesus’ beside me and then they pulled the woman to the back seat and put me in the middle.

“The next thing I knew I tried to get off the bus and then I kept struggling and I was terribly beaten after which they now took my phone and asked me to remove my iCloud from and then took my ATM, asked me for the pin and took all my valuables removed all my jewellery and beat the hell out of me, they even asked that I borrow a million naira or I better start calling family.

“All this was happening while the vehicle was in motion, we even got to a police checkpoint but at this time, I was asked to lay down between the driver’s seat and front passengers’ seat where they kept their legs on me and put a bag on my face in case anyone had to look into the bus.”