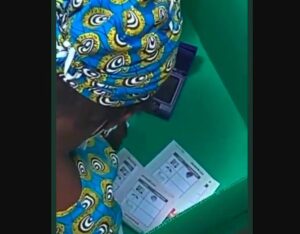 Footage of a woman massively ‘rigging’ votes at a polling unit during the Lagos LG elections today has gone viral on Social media.

According to Cable, the yet-to-be identified woman is seen thumb-printing several ballot papers in favour of the All Progressives Congress, APC during the exercise earlier today.

YOU MAY ALSO LIKE:   You Are A Bandit-Lover, Join Them In Zamfara For Sharwama – Femi Adesina Fires Back At Gumi
LG Election: Woman caught Massively Rigging Votes in favour of APC [VIDEO) 2021-07-25
Oluwasegun Adesuyi
Share