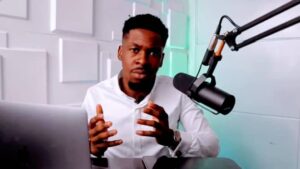 News making the rounds confirmed, Winner Ogundipe, the son of Prophet Israel Oladele Ogundipe of Genesis Global,is currently smiling to the banks. This is owing to the fact that, the promising young man has learnt to have diversify like his father.

In a recent release by the media aide to Prophet Israel, Oluwaseun Fabiyi, he revealed that, the promising young man is making waves, in an online business networking he delved into.

YOU MAY ALSO LIKE:   Nigeria Needs Competent Hand and not Religion Inclined Leader - Prophet Israel of Genesis Global

Aside his football career,Winner is said to have been scooping home at least Sixty Thousand Naira (N60,000) daily, from the business.

Without mincing words, Oluwaseun Fabiyi the media aide to his Dad, prophet Israel Oladele Ogundipe aka Genesis Global emphasized that, Winner has been a goal-getter right from his tender age. He added that, the young man in his unrelenting nature;had aspired to be a footballer. He said,In adhering to his father’s several teachings on hard work and diligence, Winner felt football only; might not put food on his table or allow him to actualize his other dreams,he therefore promptly delved into online networking,for self reliance and actualisation.

In the same vein, prophet Israel has maintained that,his son’s many exploits are not accidental, rather,they are because of his own resolve to adhere to biblical injunction which says; ” train up a child in the way he should go,and when he’s old, he shall not depart from it.”. He explained further that, for a child to give his parents rest on every side, financially,such a child must be shown the ways of Godliness and hard work.

While Winner’s age mates and contemporaries are busy indulging in fraudulent activities and unnecessarily lavishing their parents’ resources and affluence, he has chosen not to be intimidated,but to follow the path of his father’s footsteps, and there’s no gainsaying that, he is a greater version of Prophet Genesis.

Since Winner is never tired of diversifying, one can only watch out for his next breakthrough.