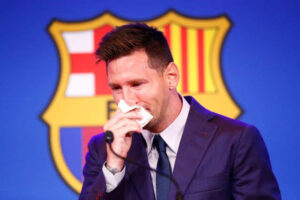 Argentina captain, Lionel Messi on Sunday was in tears at the start of the Barcelona press conference over his future on Sunday.
This is coming after La Liga side, Barcelona announced that they are unable to seal a deal with their long time captain, who is reportedly close to a move to Paris Saint-Germain.

He said, “These recent days I’ve been thinking, giving a lot of thought to what I can say. And the truth is that I can’t think of anything, this is difficult for me after so many years.

“I’ve been here my entire life, I’m not ready for this. And last year with all the nonsense, I was convinced of what I wanted to say, but this year it is not the same.

“This year my family and I were convinced we were going to stay here, that is what we all wanted more than anything. We were at home, and we thought we’d be staying here in Barcelona, the time we’ve hard here and with the city and [in terms of the] football has been amazing.

“But today, I have to say goodbye to all of this.”