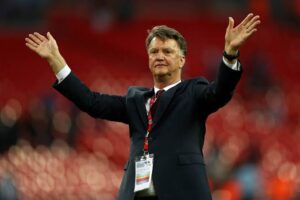 Louis van Gaal was relieved of his duties at Manchester United in 2016 but is back in the managerial hot seat, taking the reins at the Netherlands for the third time

Louis van Gaal has been named Netherlands boss – his first job in management since he was sacked at Manchester United in 2016.

He replaces Frank de Boer in the hot seat.

Van Gaal said of his appointment: “Dutch football has always been close to my heart and national coaching is in my view a key position for the further advancement of our football. Moreover, I consider it an honor to coach the Dutch national team.

“There is little time for the next qualifying matches, which are immediately crucial for participation in the World Cup. The focus is therefore immediately 100 percent on the players and the approach. After all, I was appointed for that.

“It is good to be back in Zeist. By now I have already spoken to a number of players and the technical staff has been put together with the KNVB. I am very much looking forward to getting the job done together.”

Previous #BBNaija: See What Angel Was Caught Doing with Her Private Part (Video)
Next Unveiled: Mystro, The Silent Worker Behind Trending Global Musicians