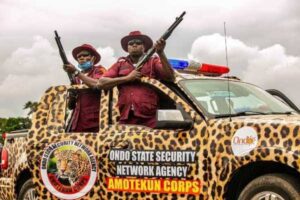 A 35-year-old man identified as Michael Akolawole, has died ten days after he was given a concoction by his mother to stop his epilepsy.

According to Leadeship, Michael was reported to have given up the ghost in the hospital where he had been receiving treatment in Ondo town, the headquarters of Ondo West local government area. The deceased, who was suffering from epilepsy, was given a chemical substance called ‘’Koikoi” by his mother, with the hope that it would cure the ailment. Sadly, his health took a drastic turn and he was rushed to the hospital where he was placed on admission.

The deceased’s mother, Anike Adeyosoye was consequently arrested by the men of the Amotekun corps but later released so that she could take care of her son in the hospital.

After the deceased’s mother deposited the remains of her son into the hospital morgue, she immediately took to her heels. Michael’s father who had reported the case to the Amotekun Corps in Ondo town after the woman poisoned his son declined comments when he was contacted by journalists.

YOU MAY ALSO LIKE:   Heritage Bank partners Silverbird to empower young creative Nigerians