Man Who Was Sentenced To Death Commits Suicide In Kuje Prison 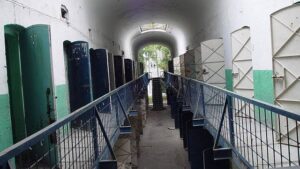 Man Who Was Sentenced To Death Commits Suicide In Kuje Prison

A 43-year old businessman on death row has committed suicide inside Kuje prison in Abuja.

Obinna Echianu was sentenced to death for killing Edwin Ali an uber driver, it was gathered.

Echianu was said to have committed the crime alongside Everly Nnorom, a 27-year-old student. However, Nnorom was discharged and acquitted of the crime while Echianu on the other hand was sentenced to life imprisonment.

The prosecutor, Donatus Abah told the court that both men conspired and planned to rob and kill on Dec. 25 2016 which is punishable by death under the law.

The assailants were armed with a revolver pistol and 33 live ammunition and forcefully took the deceased’s Nissan Almera car and a mobile phone at Gosa pedestrian bridge, Airport Road, Abuja. After the robbery, Echianu shot and murdered the driver before fleeing the scene.

A source quoted by Sahara Reporters said Echianu was so unhappy about his sentence that he decided to take his life.

The source said: “He went into the bathroom in his cell and hanged himself. His lifeless body was discovered dangling from a rope around his neck. It is not clear what triggered this last act.

YOU MAY ALSO LIKE:   Nigeria Vs Ghana: To Mobilize Support For Super Eagles, FG Directs Closure Of Public Offices By 1pm

“However, it raises questions about the condition of the prison system in Nigeria. Why could a person on death row have easy access to a means of hanging himself? Also, what is the state of healthcare in the prisons, especially for inmates with mental health issues?

“It is is now too late for anyone to know what would have been the outcome of his appeal. Death of the accused ends every criminal trial.”

YOU MAY ALSO LIKE:   Cardi B becomes first female rapper with two diamond-certified songs
Man Who Was Sentenced To Death Commits Suicide In Kuje Prison 2021-10-04
Oluwasegun Adesuyi
Share

Previous The Nerve of a Super Fraud : Aiteo Slams $2.5bn Suit against Shell over Sale of OML 29
Next 2023: Badagry traditional rulers endorse Tinubu for president