Many Injured As Hausa, Igbo Traders Clash In Edo 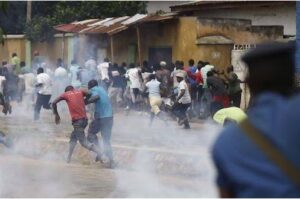 There was chaos in new Benin Market, Edo State on Saturday morning after hundreds of angry Igbo youths who are mainly traders clashed with Hausa traders.
The argument allegedly began following a minor disagreement between the two traders.

According to PUNCH, the Igbo trader was said to have ordered the Hausa trader to leave the front of his store but the latter who felt slighted drew his machete and inflicted several cuts on the Igbo trader.

YOU MAY ALSO LIKE:   MC 90s Storms Ibadan With Pure Laff

It was learned that some angry youths went in wild protest as they pounced on the suspected killer.

The troublesome business sector had been taken over by a joint squad of armed security personnel made up of military and police troops.

As of the time of filing this report, the State Police Command had not issued an official statement regarding the occurrence.

Tags Igbo Traders Clash In Edo Many Injured As Hausa