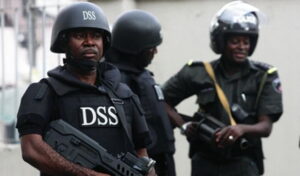 Unknown gunmen on Sunday attacked and burnt down the police and the Department of State Services offices in Nnewi, Anambra State.

According to witnesses, the attacked occured on Sunday afternoon around 1:00 p.m.

It was gathered that when hoodlums stormed the offices, they overpowered personnel and set fire to the facilities.

“The attackers said they don’t want to see any Nigerian flag standing in the area,” a witness told Peoples Gazette.

The number of those killed or injured cannot be ascertained as at the time of filing in this report.

In related news, an aide to Governor Babajide Sanwo-Olu of Lagos State, Joe Igbokwe, has accused the Indigenous People of Biafra, IPOB, of burning down his house in Nnewi, Anambra State.

In a post on his Facebook page on Sunday, Joe Igbokwe accused IPOB members of being behind the incident.

According to the All Progressives Congress, APC, chieftain, he was not hurt

“IPOB invaded my house in Nnewi about now. Iam sure they raised down the my house giving the jerrycans of petrol I saw being offloaded from their Sienna car via CCTV. To God be the glory . Iam still alive. My Study is my greatest regret,” Igbokwe wrote

YOU MAY ALSO LIKE:   Lanre Teriba bill for American Tour ...To perform at ICCS Summit
Burn DSS Many Killed As Gunmen Attack Police HQ In Anambra 2021-10-03
Oluwasegun Adesuyi
Share