Meet Abigail Johnson the Woman Who Manage over $5trillion Investments 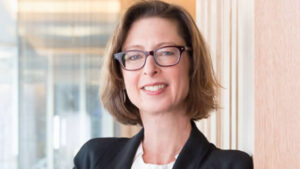 However, Abigail Johnson, an American born billionaire is presently the world’s richest person in finance with a net valuation of $26.2 billion.

YOU MAY ALSO LIKE:   Frank Edoho replies lady who called out Toke Makinwa as unfit host for Gulder Ultimate Search

She leads Fidelity Investments, the world’s leading investment firm which was founded by her grandfather Edward C. Johnson II.

Fidelity Investments was established in 1946 and is one of the biggest and most influential asset managers in the world with $4.9 trillion in assets under management as of June 2020, and a combined total customer asset value of about $8.3 trillion.

Abigail Johnson, the Harvard and Cambridge-trained business executive at the time of writing this report presently owns about 24.5% of FMR, which handles about $5 trillion in assets under management.

Her father, brother Ned IV and sister Elizabeth own almost 50% of Fidelity’s parent company, FMR LLC, and have served as leaders of Fidelity Investment since 2014, pushing the company’s influence in key financial markets that include crypto.

Her family’s investments include Impresa Management, a top-notch hedge fund according to a March 2020 Form ADV filing. It holds about $9 billion in assets.

Recall that some days ago, Fidelity Investments revealed plans to launch its own Bitcoin exchange-traded fund as the $5 trillion asset management company strengthens its position in the world’s leading financial asset class.

YOU MAY ALSO LIKE:   Coalition Of Northern Groups, Slams PSC, Demand Review Of Abba Kyari’s Suspension

FD Funds Management, a subsidiary of Fidelity, some days ago revealed it had come up with a strategy in creating an exchange-traded fund called the Wise Origin Bitcoin Trust.

Abigail Johnson’s current net valuation of $26.2 billion would be about 15.2 million troy ounces of gold or 406 million barrels of crude oil.

That being said, Abigail Johnson is known for being intensely private, despite ranking among the world’s wealthiest.