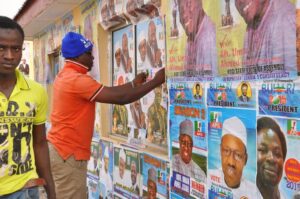 Some finance and economic experts are projecting further naira devaluation as election campaigns kick-off in less than a week.

They also revealed that politicians have already begun buying dollars in bulk to fund campaigns.

The Central Bank of Nigeria sells dollars at N436 at the Investor and Importers Window for Foreign Exchange, while the Bureau De Change operators sell for N712 per dollar.

At the peer-to- peer (P2P), which provides an online platform where people can exchange currencies with one another, the currency trades at N720 per USD.

Nigeria is battling its worst dollar crunch driven by drop in oil revenues, while inflation and insecurity are scaring investors that would have injected the needed forex to turn around the economy.

Currently, Nigeria’s apex bank is pursuing $200bn non-oil remittance in the next five years through the RT200 Forex programme and has only raised $1.65bn since its launch in February.

“We are aggressively looking at non-oil exports and it is paying good dividend. Nigeria remains an investment haven based on the size and the economy in Africa and also because of the market in Nigeria,” CBN Governor, Godwin Emefiele said during an investor call in New York.

But more pressing for the apex bank is the pressure that the political campaign ahead of the 2023 general elections will exert on the naira.

YOU MAY ALSO LIKE:   BREAKING: Police Arrests Lady Who killed Her boyfriend, absconds with New Benz Car in Akwa Ibom

Campaigns will officially kick-off on September 28, 2022, according to the Independent National Electoral Commission and historical trends have shown how politicians funded campaigns with the dollar.

Alh. Shehu Jega, a forex expert and a dealer at Bani Mbaka Bureau De Change in Zone 4, Abuja told THE WHISTLER that the worst is yet to come, particularly as politicians will exchange huge amount to dollars for campaign purposes.

Jega said, “The campaign is going to influence the exchange rate because the dollar is more portable than the naira and the politicians can carry any amount without it showing.

“If you want to campaign with the naira and you know campaign in Nigeria without other currencies is impossible. So, the politicians will resort to bulk buying and hoarding of dollars so that they can fund their campaign.

YOU MAY ALSO LIKE:   CSO Criticize FG over Proposed reduction of civil servants’ salaries

“It is a usual thing. So, in whatever way, the campaign is going to influence the price of the currency more.”

He said there has been no reasonable attempt to save the naira, hence the currency will likely depreciate adding “the naira is left on its own.”

According to him, Nigeria being an import economy has seen dollar supply fall to the minimum.

Jega said, “There is bourgeois attempt to hoard the dollar. So, visually, nobody can predict the naira will rise in value.

“The trends going on now is unpredictable by anybody. You can’t exactly say this is why the naira is going down and the dollar is taking advantage. But the most important factor is that the demand is going down.”

He hinted that panic buying is also a major concern which must be addressed to save the naira.

He added, “There is a lot of panicking in the market, people are trying to maintain their economic value and as a result of that, they are resorting to buying dollars to hoard. But I don’t think there is any real attempt to devalue the naira.

YOU MAY ALSO LIKE:   Olubadan Honours Ganduje With Chieftaincy Title As Governor Preaches National Integration

“But it is devaluing and the market causing that. The price is going the way it is. Ever blessed day, the demand is going higher and it is a common knowledge that once the demand overwhelms the supply, automatically it will fall.

“People who hold dollar now are hoarding it because they are sure of their value. Those who do not have will love to have it to secure their value.”

“Keep whatever dollars you have close to you. Difficult days ahead. Nigeria needs dollars. It can’t earn enough, because she can’t protect her pipelines. It can’t borrow, because its current revenues can’t service existing debt. We need non-oil exports and remittances plus a devaluation,” he added.