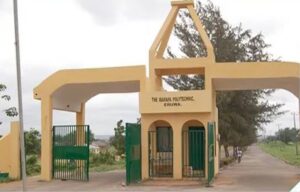 The National Association of Nigeria Students has tasked the Oyo State Police Command to find the policeman who allegedly shot a student of the Business Administration Department at Adeseun Ogundoyin Polytechnic, Eruwa, Samuel Akinsuyi.

The Coordinator of NANS in South-West, Olatunji Adegboye, said Akinsuyi was coming to Ibadan from Eruwa on Friday when a yet-to-be identified policeman shot him in the leg.

The NANS coordinator on Monday accused the Oyo State Police Command of cover up while lamenting frequent cases of harrasment of students by the police in the command.

The incident reportedly triggered panic as students of the polytechnic staged a protest against it.

The NANS coordinator said, “On Friday, March 11, 2022, the Nigerian students yet again suffered a great injustice from the hands of a reckless policeman.

“Akinsuyi Samuel, A Business Administration student at the Adeseun Ogundoyin Polytechnic in Eruwa, was beaten and then shot on the leg by a yet-to-be-identified stop and search Police officer, on his way from Eruwa to Ibadan on Friday.
This demonic action has thrown Mr. Samuel Akinsuyi into a titanic battle against paralysis.

“It is rather unfortunate that several days after the criminal incident, the Nigeria Police Force, Oyo State Command and the Police Service Commission have failed to make convincing action statement over this persistent cankerworm.

YOU MAY ALSO LIKE:   Ecobank Nigeria Has Stable Outlook, Quality Management – Fitch Rating

“As the culture is, most times when an officer of the law infringes on the fundamental human rights of the citizens, the police force and the service commission usually perfect a cover up and make sure that justice is circumvented.

“Up till now, the assailant remains unidentified. This is a clear sign of the regular conspiracy practices of the police force.

“As we continue to piece the puzzle together, we demand a thorough and exhaustive investigation to identify the culprit and the law be allowed to take its full course through the arrest, dismissal and prosecution of the offender as well as other disciplinary actions though the force itself and the police commission.”

However, the Police Public Relations Officer in Oyo State, Adewale Osifeso, could not be reached for his reaction to the incident and the allegation against the police.