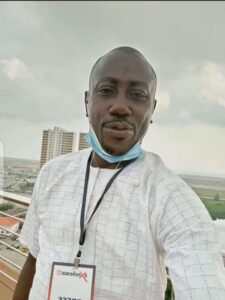 The President, National Association of Online Security Reporters, NAOSRE, Comrade Femi Oyewale, executives, members as well as the Nigerian Ambassador to the Republic of Benin, Lieutenant General Tukur Buratai, Rtd, have expressed shock over the death of one of its esteemed members, Mr. Adewole Qudus which occurred on April 1 after a brief illness.

Until his death, Adewole Qudus was the publisher of ebonymedisgist, an online medium which ranked amongst the most reliable news platforms in the country.

Oyewale described Qudus as ‘irreplaceable,” adding that NAOSRE has lost one of its best hands.
“It is a personal loss to me and NAOSRE because Kudus was not just a colleague but a personal friend and a brother.”

He stated that the lively spirit with which Kudus spoke with him about 48 hours back was so assuring that he was convinced that the hardworking journalist was getting better and would vacate the hospital bed in a matter of days.

“Regrettably, he died even when I thought he was getting well,” Oyewale disclosed.

Expression his shock, the association’s Grand Patron and former Chief of Army Staff, Buratai said it was the least news he expected to receive at this time saying he recalls reading his stories as Army Chief as well as an Ambassador on ebonymediagist blog “And I was particularly looking forward to seeing him and other members soon.

“My condolences to his family, NAOSRE executives and members including the Nigerian media for this sudden death of such a promising journalist.

While the executives and members are making plans for the burial, a condolence register has been opened at the association’s Abule Egba office in Lagos.

YOU MAY ALSO LIKE:   ACG Of Immigration, Zone A, Oluremi Talabi, Sues For Efficiency As She Visits Lagos State Command

Adewole Qudus left behind a father, mother and young family