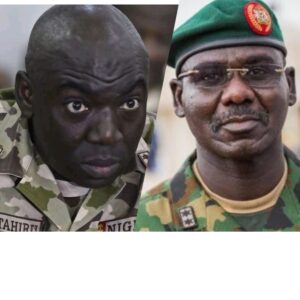 Following the heightened insecurity enveloping almost all the geo political zones in Nigeria, Femi Oyewale, President, National Association of Online Security Reporters, NAOSRE, has raised concerns over cautionary comments alluding to an allegation that some leaders are plotting to overthrow the government.

The Presidency, on Tuesday, claimed it has evidence to the effect that some elements are recruiting ethnic groups and politicians to convene a conferences where a vote of no confidence would be passed on the President.

Reacting, Oyewale emphasized the patriotic efforts made by the immediate past Chief of Army Staff, Lieutenant General Tukur Buratai, who, on assumption of office, recovered all the territories previously occupied by insurgents as well as put in check suicide bombing.

Oyewale stated that during Buratai’s period, sanity was gradually retuning to the system and military personnel were pre occupied with engaging the insurgents for a safer Nigeria.

“At no time were there insinuations of attempting to overthrow government because soldiers were happy to defend Nigeria. We were not receiving DSS alert on overthrowing government during Buratai,” he said.

He however wondered how, within few months, the country has been turned into turmoil and insecurity has assumed freighting and disintegrating dimensions.

The NAOSRE President therefore called on the present Chief of Army Staff, Ibrahim Attahiru, to deploy Tukur Buratai’s strategies and sustain his efforts even as he concurs with Philip Agbese’ submissions, reproduced below

Combating terrorism or insurrections are acknowledged globally as quite arduous assignments. Soldiers who command such warfares must be necessarily be brave, courageous and determined combatants of the trenches. It’s not a task for the faint- hearted!

The ex-Chief of Army Staff (COAS) and leader of the counter-insurgency operations in Nigeria, retired Lt. Gen. Tukur Yusuf Buratai, remonstrated these rare qualities abundantly when he scored the shots on the podium of terrorism combats in the country.

But a very honest verdict on the ex-COAS, as the honcho of anti-insurgency operations in the country from May 2015 to January 2021 can only be gleaned from the enduring whirlwind of his exploits, long after he quitted active service.

Even unpatriotic misanthropes can sight the legacies of Buratai which have refused to be fogged by the thickness of billowing smokes; whether of partisan and ethno-religious flavors, as peculiarly Nigerian.

Buratai’s successor, the incumbent COAS and ombudsman of the counter-insurgency operations, Lt.Gen. Ibrahim Attahiru might not be caught unawares by the new assignment. But its certain, his predecessor, Buratai left a big-sized shoe, quite uneasy to wear effectively.

An introspection of what constituted the defining principles and convictions, Gen. Buratai weaponized to wilt the storm of insurgencies and insurrections in the country for six long years would certainly prop up the image of a strong leadership character in his persona.

Even dispassionate outsiders attested loudly to Buratai’s palpable, unshaken and unfractured patriotism and loyalty to Nigeria. He could be jovial with his subordinates to a fault; but upheld the sacred military doctrines of professionalism, loyalty and discipline.

YOU MAY ALSO LIKE:   Shocking: Woman Cries Out After Seeing This Strange Thing Inside Popular Juice Pack In Abuja ( Video)

He dispensed himself to soldiers generally as a father, blood brother, welfarist, amiable boss, compassionate leader, trustworthy compatriot and courageous warrior in the trenches. Boko Haram factional leaders, both Abubakar Shekau and the ISIS-backed Musab Al Barnewi, in alliance with Sheik Ibrahim El-Zakzaky of the IMN or Shiites in Nigeria, another terrorist’s sect, wished Buratai dead for his uncompromising stand.

Leaders of these sects operating in Nigeria, vigorously pursued the agenda of eliminating Buratai through terrorists’ ambushes of his convoy in the Northeast and the assassination plot hatched against him in Zaria by IMN. Though he faced death multiple times in the trenches, but remained resolute and undeterred.

Buratai’s NDA course mate and friend, who retired much earlier, Major Daniel Banjo (rtd), recalled when he requested for a thanksgiving service in his home state for the ex-COAS; “I remember, about three times, he (Buratai) called me in the middle of the night. He was at the warfront. He would call and say things are happening here and Nigerians are not appreciative of what we are doing…He wouldn’t sleep for weeks. He was ambushed three times and he jumped into the bush with his men, with Kalashnikov (AK-47 rifles) and they would be able to kill some and arrest some.”

Hate or love him, but it never escaped the sight that Buratai was relentless and untiring. His troops often chortled among themselves whether this boss ever slept or thought of a beloved family which also needed his attention.

He sprung surprises of a talisman with his presence everywhere in the warfront, day and night, from North to South. He constantly visited troops and supervised Army units and formations to ensure planned Internal Security (IS) operations or projects progress smoothly and unencumbered. He tolerated no excuses for failure from troops on any assignment.

And to bolster performance and unalloyed loyalty, Buratai also, religiously fulfilled his own part of the bargain by ensuring troops legitimate entitlements and allowances were promptly delivered to them, even in the frontlines. It was one of the many things Buratai got right and it really worked for the Nigerian Army, especially for the troops in the frontlines on terrorism combating expeditions.

He treated the families of troops like his cherished assets and personal family. Buratai paid frequent visits to Army barracks, interacted with wives of soldiers, listened to their problems and remedied them immediately. Nigerian Army Officers Wives Association (NAOWA) explored new frontiers in economic empowerment of wives of soldiers through various multi-purpose cooperative investments initiatives.

The ex-army chief further boosted the morale of his troops with packages such as the COAS special allowances and incentives, like special recognitions’ and instant or accelerated promotion of troops who demonstrated proven gallantry, courage and exceptional excellence in the frontlines.

The expansion and re-equipping of the of the Nigerian Army was another was a focal policy of retired Buratai’s leadership. He relaunched the Nigerian Army on the path of manufacturing its own small and light weapons in the combat of terrorism, innovatively using home-grown technology and human resources’.

Under his reign, the Nigerian Army established two new Army Divisions 6 and 8, in Borno and Rivers states; a dozen Forward Operations Bases (FOBs) and Special Task Force units across the country in strict compliance with the new Order of Battle (ORBAT). The initiative brought security closer to Nigerians, boosted troops rapid responses to distress calls from entrapped Nigerians and the operational effectiveness of soldiers in operations.
Nigerian soldiers were endeared to Gen. Buratai and performed their official assignments with glee because he prioritized the building of infrastructures for soldiers and officers of the Nigerian Army. He had stringent focus or absolute belief in the welfare of troops in multiple ways and he knew, soldiers deserve at least minimum comforts to function splendidly. So, he erected new office and residential accommodation for soldiers.

Therefore, Buratai aggressively relaunched the Nigerian Army on the path of its lost glory in revolutionary style. The former army chief embarked on ambitious projects such as the massive construction of new army barracks, renovations of dilapidated barracks and army formations, their upgrade and re-equipment with state-of-the-art facilities; resuscitation of moribund Army training institutions and the building of new ones, namely, the Army War College, the Army Aviation School and the Nigerian Army University, Biu.

Buratai garnished it with the generous renovations/upgrades of existing, but outdated army hospitals and the building of new Army Referral hospitals to carter for the Medicare of soldiers, their families and members of Army host communities. These were legacy projects, signposts of focused leadership, the pillars and inerasable footprints of his leadership that publicized a reformed Nigerian Army in conduct and performance.

The former army chief understood clearly that the success of Nigeria’s anti-insurgency combats basically depended on the assistance of foreign nations in weaponry and technical support. He was conscious of the prohibitions on human rights abuses by soldiers as enshrined in the Leahy Act amendment law. Besides, as a humane and compassionate leader, Buratai was conscious of the human dignity of all Nigerians. He never shirked from punishing erring soldiers.

Consequently, records of his observance of human rights were unequalled in the history of the Nigerian Army. He established the novel Human Rights Desk in the Nigerian Army, manned by a desk officer, and structured in an accessible manner to all Nigerians by its replication in all major Army formations throughout the country. The Army human rights desk handled, redressed and dispensed hundreds of cases between soldiers and civilians.

YOU MAY ALSO LIKE:   Forget Constitution, Arm Yourselves, War Has Been Declared On Us—Akintoye Alerts Yoruba People

The Nigerian Army was under the plague of meagre budgets for its operations, even in the age of consuming insurgency. Therefore, Buratai imbibed the spirit of transparency, accountability and judicious application of Army resources for maximum effects. Lack of transparency in the administration of Army resources’ engendered distrust, dissension and rebellion among officers and soldiers.

Foremostly, Buratai resolved the problem by switching over to e-governance in consonance with the policy of the federal government. He established the Army Procurement Department; migrated the Nigerian Army into the IPPIS payment system, and halted the culture of table payment of allowances/entitlements to troops in the warfront, which often led to avoidable complaints of diversion.

The former leader of counter-insurgency operations in Nigeria was a famed Military strategist, tactician and foresighted leader. Therefore, his clairvoyance pricked him of the looming threat of Cyberspace terrorism in combating insurgency in Nigeria. In order to clip the wings of cyberspace terrorists, who were largely Boko Haram sympathizers’ and agents, Buratai built and launched the Nigerian Army Cyberspace Warfare Command. Its mandate mainly is to secure Army’s classified information from leakage to enemies and certify the preservation of sensitive documents.

Added to it, Buratai upgraded and re-equipped the Department of Army Public Relations (DAPR)) to handle fake news and propaganda syndrome on the counter-insurgency operations in the country. The DAPR operated 24hours a day and proactively deflected terrorists’ propaganda which previously caused unnecessary public anxiety and panic.

To this end, good leadership examples are worthy of emulation. The onus falls on Gen. Attahiru, who is also an old horse in the game to sustain and improve on these legacies of Buratai by moving a notch higher to turn the table against Boko Haram. It is the necessary antidote the incumbent Army leadership has to adopt, if it wants to really succeed to finally cripple insurgents.

It’s no longer news that Nigerians are unwittingly beginning to celebrate the Buratai days. But Nigerians want to celebrate the Army at all times and the only alternative is to kick harder, harder than Buratai ever did. Attahiru should be mindful of news of Boko Haram dreadful presence in Niger state and predictively, Abuja is now donated to the mercy of terrorists.

But fundamentally, all the incumbent Service Chiefs have already clocked 100 days since their appointment on January 26, 2021. Quite unimpressively, media reports are awash with news that 741 Nigerians have been killed by Boko Haram/ISWAP terrorists, armed bandits, herdsmen and arsonists across the country. Neither is it exciting that the southern part of the country is also contending with lethal kidnapping syndicates and killer herdsmen conundrum. Nigerians are no longer singing joyful songs which heralded the new service chiefs and there is need to redouble the efforts.