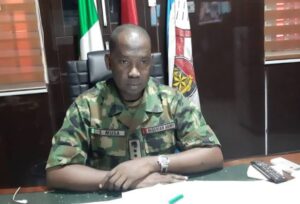 The national leadership and members of the National Association of Online Security Reporters, NAOSRE, have commended Brigadier General Sagir Musa, the immediate past Nigerian Army spokesman for his commitment to duties and seamless synergy with the media in promoting military operational understanding with the public.

The association President Mr. Femi Oyewale stated this in a statement on Saturday.

In the statement, Oyewale noted that managing the communication functions of an institution like the Army could be challenging but added that Sagir displayed professionalism and maturity in handling obviously vexatious issues whenever they arose.

“Overtime, there were renewed bashings from both local and international media in equal measures, yet, you remained unwavering and continued in a most commendable fashion.”

Continuing, Oyewale emphasized that General Sagir assumed office at a period classified as one of the most trying in Nigeria’s history, stressing that Sagir’s basic understanding of the nuances of Nigeria which translated into balanced people-oriented information, at a time of confidence loss, deserves commendation.

“NAOSRE recognized this and never waved in its vision of supporting the patriotic efforts of security operatives. We were particularly hooked on the Nigerian Army by publishing Army stories to keep the public informed.

“We salute your courage and requisite compassion to soldier on by keeping eyes on the ball. However, the task of securing Nigeria remains ongoing. We therefore, admonish you to deploy same energy, zeal and intelligence in the execution of your assigned duties wherever you are deployed,” Oyewale stated.

He stated further that “I must not fail to use this medium to convey the association’s profound appreciation to the former Chief of Army Staff, Lt. Gen. Tukur Buratai. NAOSRE had a harmonious working relationship with you for a safer Nigeria.”

Oyewale promised to oil the association’s firm conviction on media role in promoting national security. He added that NAOSRE is committed to work with the new Army leadership by enhancing trust between security agents and citizens through factual and professional reportage for a safer Nigeria.

Previous Lateef Jakande: NAOSRE Condoles With Sanwo-Olu, Media Industry
Next WITH YOUR FIRSTMONIE WALLET, YOUR VALENTINE HAS GOT A BOOST WITH BONUS DATA AND AIRTIME