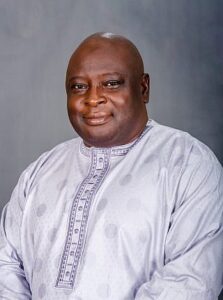 YOU MAY ALSO LIKE:   Why Buhari Returned To Nigeria Instead Of Jetting To UK For Medical Checks – Presidency

Making the remarks during a cooperation conversation between NAOSRE President, Femi Oyewale and Otitoju, the former Editor of The News Magazine stated that “What you guys have done so far is encouraging and nationalistic especially your dinner conference. The dinner was a huge success. It was a success not because of the high profile venue but because you were able to bring the military together to talk about Nigeria’s security situation.”

Continuing, Otitoju emphasized the importance of such dialogue in Nigeria’s match towards safer country saying “I am also a strong believer in Nigeria. We are all playing our respective roles to promote unity and ensure the country is safe. Therefore, I share in your association’s vision,” he said, adding that he is willing and available to support anything that will engineer peaceful Nigeria.

Earlier, Oyewale hinted Otitoju the desire of NAOSRE to have access and tap into his reservoir of knowledge in pursuing the noble objectives of the online media association which he described “As national in contents and scope.”

The on-going conversation however, is expected to birth a strengthened curve in the pursuit of NAOSRE’s national security goals in the days ahead