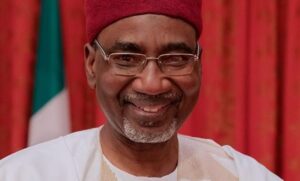 Operatives of the National Intelligence Agency (NIA) on Monday stormed the head office of Peoples Gazette in Abuja, demanding to see the online newspaper’s managing editor, a reporter and bearing a letter that threatened “other options” should the journalists fail to cooperate with stipulation for the source of a confidential memo that was published in December.

The Gazette had obtained — and published in a series of three articles — a memo that spy chiefs at the foreign intelligence office had written to President Muhammadu Buhari, warning him against retaining Rufai Abubakar as the director-general on the grounds that he lacked intellectual and physiological rigour for the position.

On Monday, nearly three weeks after the articles, four officers arrived in a white Toyota Hilux truck shortly after 1:00 p.m., intimidated security personnel at the gate and forced their way into our offices on the second floor.

The agents from the nation’s external security service then demanded to see The Gazette’s Managing Editor Samuel Ogundipe and reporter Hillary Essien. One of the officers, who adorned a cream kaftan with a matching cap, gave a letter to The Gazette’s front desk staff. Pages of the letter were subsequently scanned and transmitted to The Gazette’s lawyers in Lagos.

The officers left after they realised that Mr Ogundipe and Ms Essien were not at the office, but indicated in their letter that they will make additional efforts to realise the agency’s mission.

The three-page letter described the content of the memo written to the president by the directors as being “full of falsehood,” adding that “it is even worse that Peoples Gazette did not deem it necessary to validate the allegations in such a letter with the other party before running to press.”

The NIA, in the letter signed for the DG by Amstrong Machunga, asked The Gazette to reveal the identities of the officers responsible for the memo and its disclosure.

“It should be on the record that the NIA, as a Secret Service, is sensitive to undue publicity, but not shy of accountability and ready to engage on any issue of concern with responsible media outlets. The malicious publication under reference falls in the category of undue publicity and is most unwelcome.

YOU MAY ALSO LIKE:   THE VOICE NIGERIA SEASON 3; REFINING CRUDE MUSIC TALENTS

“Peoples Gazette, therefore, has to come clean not the falsehood it published and prove that it is not working for people with ulterior negative motives against the NIA, by forwarding to us a copy of the letter from which the publication emanated and identify signatories to the purported letter.

“This could set the stage for engagement and resolution of the damage that has been caused to the image of the Director General of the NIA and the organisation. Failure to take advantage of this opportunity may lead to activation of other options to seek redress,” the letter, dated December 23, 2021, but delivered today, said.

YOU MAY ALSO LIKE:   Ecobank Transnational Incorporated holds its 34th AGM and Shareholders approve resolutions

The Gazette made efforts to obtain comments from the NIA prior to running the articles but received no response. However, presidential spokesman Garba Shehu acknowledged the letter and said the president had addressed the concerns raised by the directors.

The Gazette stands by its story and urged Mr Abubakar and the NIA management to focus on addressing the protests of the officers who wrote the letters rather than deploying resources towards unearthing their identities.

“The NIA directors recognised the risks involved when they pushed that confidential memo to the president,” Mr Ogundipe said. “Our newspaper will not take part in breaking that confidentiality.”

“Mr Abubakar should clear the air on whether or not he failed promotional exams on three different occasions, as well as the allegations of corruption and nepotism we saw in the memo,” the Managing Editor added.

Chidi Odinkalu, a constitutional law expert and former chairman of the National Human Rights Commission, said the NIA had breached the Nigerian Constitution by sending its agents to The Gazette’s office in the manner it did.

“The NIA acted unlawfully,” Mr Odinkalu said by telephone on Monday afternoon. “If they have anything, they should collaborate with the State Security Service or the Nigeria Police Force who have the responsibility of internal security operations and law enforcement, respectively.”

Mr Odinkalu said the NIA’s move against The Gazette underscored the growing threats to journalism practice under the Buhari regime. It came a year after the regime blocked The Gazette’s website in Nigeria after a report exposed the dwindling capacity incompetence of the president’s chief of staff Ibrahim Gambari.