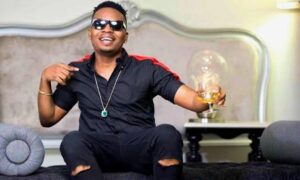 Nigerian hip-hop star, Olamide Adedeji, simply known as Olamide, has delivered on his promise to his fans as he has released his highly anticipated album — Uy Scuti.

Uy Scuti is a red supergiant star in the constellation Scutum. It is considered one of the largest known stars.

The album, which was named after the supergiant star, was released earlier today and has been receiving positive reviews from the rapper’s fans and colleagues.

So far, the album name, Uy Scuti, and Olamide are trending at number one and three, respectively, on the Nigerian Twitter space.

Taking to their Twitter accounts, celebrities like Don Jazzy, Timi Dakolo, Adekunle Gold, Peruzzi, among many others, have praised the rapper’s latest effort.

In a tweet, legendary beatmaker Don Jazzy, wrote, “The bro @Olamide just blessed us with an amazing body of work. #UYSCUTI.”

YOU MAY ALSO LIKE:   BREAKING: Court Sentence Kidnap kingpin, Evans To Live Imprisonment

He said, “Please, if you see this tweet, just give @Olamide his Flowers. #UYSCUTI is an amazing body of work.”

Fondly referred to as ‘The Energy Gad’, the hype man tweeted, “Olamide just reminded us all why they call him Baddo. He left us in a trance. This is a damn good album, beyond mature, magically different and heartfelt #UyScuti.”

YOU MAY ALSO LIKE:   Police Refutes Claims Of Attack on Ikorodu Station

Furthermore, in a series of tweets, Olamide revealed to his fans that it was not easy for him to keep the project to himself for one month before releasing it.

He wrote, “Imagine listening to #UYSCUTI alone for a month…. I want ment ! I couldn’t wait to share with the world.

“Glad it’s finally out #YBNLMafia run up the numbers! You know as the thing de go.”(sic)