Nigerian footballer sentenced to death for drug trafficking in Vietnam 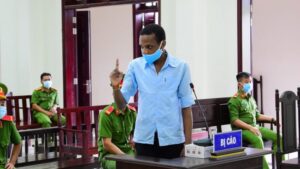 A 23-year-old Nigerian footballer, Theophilus Ugwu, has been sentenced to death in Vietnam for smuggling six kilograms of methamphetamine from Cambodia into the country.

Ugwu who was convicted by the People’s Court of the Western Province of Tay Ninh on Thursday, was arrested on March 8, 2020, while transporting 12 bags of narcotic substances from neighbouring Cambodia.

YOU MAY ALSO LIKE:   Why I Met APC National Leader, Bola Tinubu – Fayemi

According to court reports, Ugwu was charged with “illegal trafficking of narcotic substances,” a crime punishable by death in the country.

In an interview with journalists, Ugwu said he came from Nigeria to Cambodia in February of 2020 with the dreams of playing professional football.

He added that in March, he became acquainted with another African who promised to help him play for a famous Cambodian club.

He said he was contacted to deliver a package from Phnom Penh to Ho Chi Minh City (HCMC) and was promised the sum of $1000 when he delivered the bag successfully though he did not know the bag contained drugs.