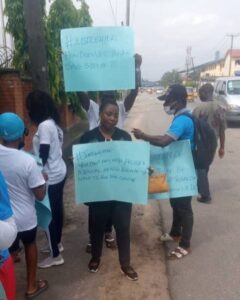 Earlier today, fans of the ex-military officer, who was fake evicted last night and currently battling with his colleague, Angel for the last spot in the finale, staged a protest over the development calling it unfair.

Reacting to a video from the protest ground which surfaced online, Reno Omokri berated the protesters. According to him, there are more pressing issue that needs the voice of the people rather than a reality show.

YOU MAY ALSO LIKE:   UBA’s LEO: Celebrating three Years of Revolutionised Banking Services

Now, you see why Nigeria is the way she is? Ask Nigerians to come out to protest for their rights and few will come out, if any. Ask them to come out for a Wizkid concert, and people who can’t feed will miraculously acquire money and sell out the concert. Imagine this going on on a Monday, when they should be productive at work or their businesses. We love to give our energies to the trivial, not the vital. Nigerians, perhaps we do deserve Buhari!” He wrote.<.blockquote>