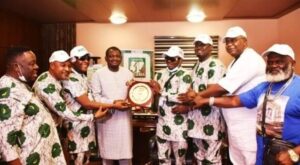 This did not sit well with many Nigerians as they questioned the award’s purpose and blasted the Nollywood stars for being concerned about their pockets instead of the masses.

YOU MAY ALSO LIKE:   Priscilla Berth with ‘Gbemileke’ a Song made for all Season

It’s the build-up to the 2023 elections, and many Nigerians who seem tired of the current challenging situation in the country are not smiling with anyone supporting old politicians.

cobz_mrcruise wrote: Mr Ibu is just unrepentant Baba no even care about the critics.

ghaffarmogaji wrote: This is why the nigerian system is always mono singular, my pocket alone, grow alone F everyone else

News recalls Nollywood actor Uche Maduagwu has tackled his senior colleague in the industry, Mr Ibu, over his show of support for the former vice president of Nigeria, Atiku Abubakar, ahead of the presidential election.

This comes after Mr Ibu and many other actors came under heavy criticism after a video of them drumming support for the 2023 presidential ambition of National Leader of APC Asiwaju Bola Tinubu surfaced online.

This angered Nigerians as they dragged the Nollywood stars for betraying the masses with such an act stating they are all after their pocket to the detriment of what happens to others.

YOU MAY ALSO LIKE:   Obaseki’s Defeatist Campaign Initiatives by Efosa Osagie

However, in a video, Mr Ibu made a Uturn after disclosing that Atiku Abubakar is his presidential candidate since he has done so much for him and given him a house to stay.

In reaction to the statement, Uche rained insults at Mr Ibu for proclaiming his support for a northern candidate as an Igbo man. He added that the 2023 presidency belongs to the south.