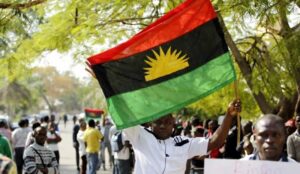 The apex Igbo socio-cultural organization, Ohanaeze Ndigbo has cautioned the Indigenous People of Biafra (IPOB) stating that the move to ban the singing of the Nigerian National Anthem and the consumption of northern cows in the south-east region might be counter-productive.

A statement on Wednesday by the Ohanaeze Secretary-General, Mazi Okechukwu Isiguzoro submitted that the move by IPOB might negatively affect efforts to secure the release of Biafra agitator who is also the group’s leader, Nnamdi Kanu.

Apart from that, Ohanaeze in its statement observed that the step taken by IPOB may put an end to the moves to actualize a 2023 Igbo presidency and also mislead the younger ones.

It also cautioned that the southeast region may be opened to military raids accompanied by fighter jets capable of inflicting hardships on the people of the southeast zone.

The Igbo socio-cultural body made its views known in reaction to the declaration by the proscribed IPOB banning cows reared by Fulani herdsmen for any social event in the Southeast as from April 2022.

The declaration by its Head of Directorate Mazi Chika Edoziem through its Media and Publicity Secretary, Emma Powerful also banned the recitation of the National Anthem in schools in the region, Naija News reports.

But Ohanaeze has now cautioned IPOB against plunging the southeast region into regrettable action that will pitch the region against the federal government of Nigeria and the other parts of the country.

Ohanaeze noted that the IPOB order “will affect the ongoing diplomatic efforts to free Nnamdi Kanu. Instead, the FG might unleash bitterness on the South-East.

YOU MAY ALSO LIKE:   OUR BRANCHES ARE OPEN NATIONWIDE

“This order is also nonetheless destructive to the campaign for the Igbo presidency in 2023 and will give birth to avoidable military raids on all public schools in Southeastern Nigeria, with the ongoing ‘Operation Golden Dawn’.”

The Ohanaeze scribe added that “reciting of the Biafra anthem in public schools remains prohibited, forbidden and proscribed, as the South-East is still an integral part of Nigeria.

YOU MAY ALSO LIKE:   Kanye West divorce: Drake Hint at Kim Kardashian Affair

“We cannot afford to mislead and misinform our pupils into trending into paths that will attract grave consequences for Ndigbo.

“Ndigbo should flout such despicable orders of absurdity, as it will be the rationale for future deployment of military Tucano fighter jets to South-eastern Nigeria.”

Instead, Isiguzoro urged IPOB to “join Ohanaeze in the promotion of Igbo language, cultural heritage, and values in all South-East public schools. This is the best way to get our youngsters to remain committed and imbibe the cultural values and heritage of Ndigbo.”

YOU MAY ALSO LIKE:   Singer Terry G Releases New Pictures before Europe Tour

He added that killer herdsmen disguised as normal cattlemen were responsible for the killings and general insecurity in the southeast.

“The recent security challenges in South-eastern Nigeria are created by killer herdsmen masquerading as cattlemen to perpetrate heinous onslaught against our local communities.

“The enforcement of the ban on consumption of Fulani cattle should be a protest against unhealthy and disease-infested cows being sold to Ndigbo,” he noted.