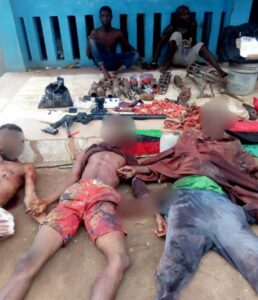 The Nigerian Army has killed five members of the outlawed Indigenous People of Biafra (IPOB) in the Arochukwu area of Arochukwu Local Government Area of Abia State.

According to a source, the IPOB members were killed on Thursday during an exchange of gunfire with soldiers around the palace of the community’s monarch.

YOU MAY ALSO LIKE:   BREAKING! Cultists Clash In LAUTECH, Chops Off Student’s P*nis

He said the IPOB members were enforcing the sit-at-home order they declared to protest the unlawful detention of its leader, Nnamdi Kanu.

The source said the pro-Biafra agitators took to the streets to celebrate the news that their leader had been brought to court.

He added that the IPOB members who were also in a jubilant mood that Kanu is alive, contrary to reports they had been getting about the safety of the separatist leader, marched on the streets.

On arriving at the First Bank axis of the town, the IPOB members engaged the soldiers in a gun duel, but five of them surrendered to the superior firepower of the troops.

He said the gunshots caused pandemonium in Arochukwu, leaving residents to scamper for safety into nearby bushes.