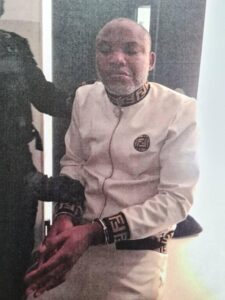 Barrister Ifeanyi Ejiofor, the lawyer to leader of the proscribed Indigenous People of Biafra (IPOB) group, Nnamdi Kanu has alleged that his client is being tortured mentally under the custody of the Department for State Security (DSS).

A court had directed Kanu to be placed in the custody of the DSS, pending his trial, after his re-arrest and arraignment last week.

YOU MAY ALSO LIKE:   Electoral Bill: Senate In Closed-Door Session After Buhari Declined Assent

But his lawyer, Ejiofor, while speaking during an interview on Arise Television on Monday morning stated that Kanu was undergoing mental torture in the hands of the DSS operatives.

He also stated that the IPOB leader is in need of medical attention, as his health had deteriorated since his arrest.

The IPOB had recently said Kanu refused to eat anything for fear that he may be poisoned while in detention at the hands of the Nigerian authorities.

Speaking further, Ejiofor also said that he was afraid Kanu won’t get a fair trial in Nigeria.