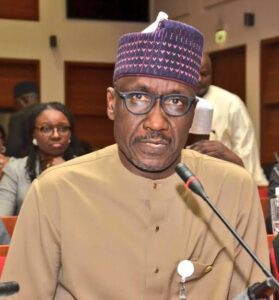 The Group Managing Director of the Nigerian National Company Limited (NNPC), Mele Kyari, has disclosed that four companies were responsible for the importation of adulterated fuel into the country.
Speaking on Wednesday during a media briefing at the NNPC Headquarters in Abuja, Kyari said MRS, Emadeb/Hyde/AY Maikifi/Brittania-U Consortium, Oando and Duke Oil brought the substandard fuel into Nigeria.

YOU MAY ALSO LIKE:   PDP Denies Suspension Of National Chairman Ayu As Party Manages Crisis

Kyari said the Methanol blended petrol was imported into the country by the four oil suppliers through its Direct-Sales-Direct-Purchase arrangement.

The NNPC GMD, however, said he has since ordered the withdrawal of all the affected products in transit (both truck and marine), disclosing that the adulterated fuel was imported from Antwerp in Belgium.

Kyari disclosed that the NNPC had ordered the quarantine of all un-evacuated volumes of the contaminated fuel that led to the disruption of the petrol distribution value chain, in order to prevent further distribution.

He stressed that the NNPC and other stakeholders were making serious efforts to resolve issues generated by the supply and discharge of methanol blended fuel in some Nigerian depots.

He said: “In order to prevent the distribution of the petrol, we have ordered the quarantine of all un-evacuated volumes and the holding back of all the affected products in transit (both truck & marine).

“All defaulting suppliers have been put on notice for remedial actions and NNPC will work with the authority to take further necessary actions in line with subsisting regulations.

YOU MAY ALSO LIKE:   Tony Elumelu Foundation to Open Applications for the 2020 TEF Entrepreneurship Programme on January 1, 2020

“NNPC wishes to reassure Nigerians that we are currently sourcing additional cargoes to ensure product sufficiency.”

The NNPC boss asserted that petrol brought into Nigeria usually does not include the test for the level of methanol content, adding that cargoes’ quality certificates issued at the loading port in Belgium, by AmSpec Belgium, indicated that the product complied with Nigerian specifications.

YOU MAY ALSO LIKE:   Hundreds of African migrants deported from UAE, Salaries Unpaid

However, Kyari disclosed that the NNPC first received a report on January 20, 2022, from its quality inspector of the presence of “emulsion particles” in petrol cargoes shipped to Nigeria from Belgium.