No Plans To Unseat Sanwo-Olu As Lagos Governor, He Deserves Second Term – Gbajabiamila 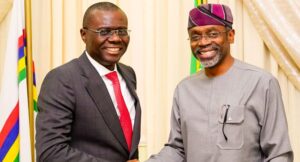 No Plans To Unseat Sanwo-Olu As Lagos Governor, He Deserves Second Term – Gbajabiamila

This was just as the Speaker representing Surulere 1 Federal Constituency in the green chamber of the National Assembly dismissed his rumoured ambition to contest for the Lagos’ governorship seat in 2023, saying he had “no immediate plan” to contest the seat as the task before him as Number 4 citizen in the country was enormous and tough enough for him to be distracted by the rumour.

Gbajabiamila threw this support on Tuesday in an interview aired on Channels TV, saying Sanwo-Olu had been doing a good job in governing Lagos, notwithstanding the difficult time he had faced in the last two years, stressing that he must not be distracted on the assignment.

Besides, the lawmaker clarified that the fact that the state once had a one-term governor at one time, in person of Mr. Akinwunmi Ambode, doesn’t mean it is going to be the same forever.

Ambode was the immediate past governor, who handed over to the incumbent, Mr Sanwo-Olu, on May 29, 2019.

“The present governor of Lagos State (Sanwo-Olu) is doing a good job. The fact that we had a one-term Governor at one time doesn’t mean it is going to be the same forever.

YOU MAY ALSO LIKE:   BREAKING: Abba Kyari, Six others sent to Kuje Prison

“This governor is doing a good job under the current circumstances. It’s been a difficult time in his last two years and he has come out well. So, why should anyone upset the apple cart? I think he (Sanwo-Olu) is doing a good job,” Gbajabiamila stated.

On his rumoured ambition, the Speaker said he nursed no ambition to contest for the Lagos’ governorship seat in 2023, declaring that he had no immediate plan for such.

YOU MAY ALSO LIKE:   Signs and Wonders Galore As TB Joshua’s protege, Evangelist Joseph David Conquers Mexico For Christ! (Video)

According to him, the task before him as Speaker, House of Representatives was enormous and tough enough for him to be distracted by the rumour.

“That (question) provokes a smile. No, I don’t have any such plan and I don’t have an immediate plan. I have a job I am doing right now; it’s a very tough job. Sometimes, it’s the most difficult job and I say it to people in the world. People don’t understand that, but this is not a forum I’m going to break it down,” he said.

“I don’t want distractions. I am working as a Speaker of the House of Representatives with a lot of responsibilities on my shoulder right now. Any other thing would be a distraction. As for Lagos State Governorship? I have not even thought about it. Why? Because, the present Governor is doing a good job,” he added.