Home / cover / Nothing Good Can Come Out Of Him, He Is A Drunkard – Miyetti Allah Attacks Gov Masari

Nothing Good Can Come Out Of Him, He Is A Drunkard – Miyetti Allah Attacks Gov Masari 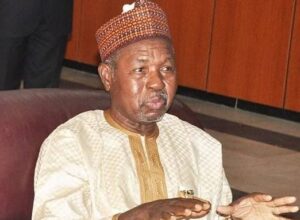 Nothing Good Can Come Out Of Him, He Is A Drunkard – Miyetti Allah Attacks Gov Masari

The Fulani socio-cultural organization, Miyetti Allah Kautal Hore, on Tuesday, described the Katsina State Governor, Aminu Masari, as a drunkard for saying most bandits are of the Fulani stock.

Masari, who featured in a Channels Television’s programme, “Politics Today” on Monday, alleged many of the bandits causing havoc in Katsina and other parts of Northern Nigeria are Fulani indigenes whose main occupation is rearing cattle.

He said: “They are the same people like me, who speak the same language as me, who profess the same religious beliefs as me.

“Majority of those involved in this banditry are Fulanis whether it is palatable or it is not but that is the truth.

“I am not saying 100 percent of them are Fulani but a majority of them are, and these are people who live in the forest and their main occupation is rearing of cattle.”

YOU MAY ALSO LIKE:   EPL clubs risk FIFA ban after blocking 60 players from World Cup qualifiers

However, in its reaction to Masari’s remarks, the National Secretary of Miyetti Allah Kautal Hore, Saleh Alhassan, asked Nigerians to ignore the governor.

He told journalists that nothing good can come out of Masari because he was a drunkard.

He said: “No one should take that drunkard seriously. Nigerians should just ignore that man as he has nothing to offer.

“Just looking at him, one would see he is tired. Do you take him serious? Records should come from security operatives, not a confused human being.

“He knows them now, is he not a Fulani man? All of them talking are stealing security votes. They should find solutions, create ranches for these herders and accommodate them.

YOU MAY ALSO LIKE:   Adejoke Orelope-Adefulire Cleared of N23Bn SDGs Money

“Which people do you find along the Sahel Sahara desert? They are many tribes. Is it by a physique that you now identify a Fulani man?

“The bandits are criminals, why should you attach tribe to it? That’s why we are not happy. You don’t need to attach a tribe because it will affect an innocent person.

“Forget that man, that man is the worst governor Katsina has had; we are just praying for his time to lapse.”

Previous BREAKING: I Only meet Dangerous bandits ‘For The Sake of Nigerians, Not For Political Gains’ – Sheikh Gumi [VIDEO]
Next We Don’t Give Preferential Cut-off Marks To Northerners – JAMB Replies El-Rufai