Home / cover / NSA Monguno Under Fire As He Goofs Again

NSA Monguno Under Fire As He Goofs Again 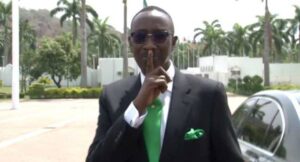 Monguno, during an interview with BBC Hausa Service apportioned blames sayings budgeted funds for arms and ammunition may not have been properly utilized, a development that has caused rift in the Presidency.

Arising from his statement, the National Association of Online Security Reporters, NAOSRE gathered that Monguno has been under fire owing to this careless statement.

Dependable sources availed that this is not the first time the NSA would be causing rift in the Presidency owing to unguarded statements.

“He knows about the defence budget and how monies are being spent. But to come out and apportion blames on former service chiefs by way of saying monies are missing as well as embarrass the Presidency in the Hausa BBC interview seems to be the height of incompetence,” a top Nigerian told NAOSRE.

Meanwhile, the NSA has issued a clarification saying he was quoted out of context and that he never said funds were missing.
The statement reads in part:

“The attention of the Office of the National Security Adviser has been drawn to some media reports regarding Armed Forces equipment during an interview with the BBC Hausa service.

“We would like to state that the NSA was quoted out of context as he did not categorically say that funds meant for arms procurement were missing under the Former Service Chiefs as reported or transcribed by some media outlets from the BBC interview.

YOU MAY ALSO LIKE:   Ize-Iyamu: When God's Grace Is Upon a Man by Tunji Fagbohun

“During the interview, the National Security Adviser only reiterated the Federal Government’s commitment to deal decisively with insecurity and stated President Muhammadu Buhari’s continued commitment to provide all necessary support to the Armed Forces, including the provision of arms and equipment.

“In the interview, the National Security Adviser clearly informed the BBC reporter that Mr President has provided enormous resources for arms procurement, but the orders were either inadequate or yet to be delivered and that did not imply that the funds were misappropriated under the former Service Chiefs. The NSA also informed the reporter that, Mr President is following up on the procurement process as is usual with contracts relating to military equipments, in most cases the process involves manufacturing, due diligence and tedious negotiations that may change delivery dates.”

YOU MAY ALSO LIKE:   Osinbajo to NEC: Don't ask Me for Anything on the New Economic Council ask Buhari

It should however be recalled that Mohammed Babagana Monguno, current National Security Adviser is a retired Nigerian military general. He was the Chief of Defence Intelligence from July 2009 to September 2011 and the Commander of the Brigade of Guards from 2007 to 2009.