Obasanjo Reveals Where Boko Haram Next Recruit Will Come From 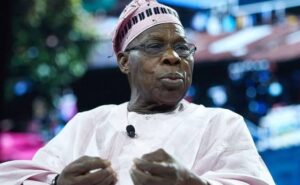 A former President of Nigeria, Olusegun Obasanjo, on Thursday, stated that the next recruit of Boko Haram will come from out-of-school children in Nigeria.
Obasanjo made this claim while addressing participants at the presidential youth mentorship retreat held at Youth Development Centre, Olusegun Obasanjo Presidential Library, Abeokuta, Ogun State.

According to Obasanjo, no one needs an oracle to know that the 14 million out of school children would turn to Boko Haram recruits in the next ten years.

He said “A situation today where we have 14 million children that should be in school that are not in school, does anybody need to be an oracle to tell that 10 years or 15 years from now, those will be where you will recruit pure Boko Haram.

YOU MAY ALSO LIKE:   Important Things You Should Know About Late Captain Hosa Okunbo
Obasanjo Reveals Where Boko Haram Next Recruit Will Come From 2021-11-26
Oluwasegun Adesuyi
Share

Tags Obasanjo Reveals Where Boko Haram Next Recruit Will Come From