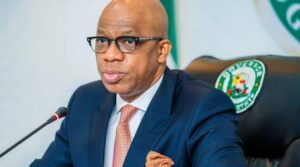 Panic this week gripped residents of Ogun after the three highest positions of civil authority were left vacant for several days.

Concerns have flared across the state that Governor Dapo Abiodun, Deputy Governor Noimot Salako-Oyedele and House Speaker Olakunle Oluomo have all left the state to run without requisite constitutional authorities as they tour different countries in Europe and America.

Peoples Gazette heard that Mr Abiodun was last seen two weeks ago when he reportedly departed for London and it was unclear when he planned to return to the state he was eventually elected to govern in 2019 after multiple attempts.

Multiple sources close to the governor informed The Gazette under anonymity that Messrs Abiodun, Salako-Oyedele and Oluomo still lingered abroad as of Monday night. The deputy governor is reportedly hibernating in London after a surgery; while the Speaker claimed to be running the state’s business in the United States.

Sources said Mr Abiodun was the first to travel and he asked Secretary to the State Government Tokunbo Talabi to run the state in his deputy’s stead. The governor’s action irked his deputy, who also “angrily travelled out of the country,” per a source familiar with the matter.

An official said Mr Abiodun appeared to be suffering from an ailment about which he had been reluctant to publicly admit. The governor reportedly flew in doctors from abroad without disclosing how much was spent from state coffers to settle the bill.

Mrs Salako-Oyedele was also partly in London for a surgical operation and scheduled medical check-ups. The Gazette has not been able to independently corroborate claims about the medical conditions of Messrs Abiodun and Salako-Oyedele.

YOU MAY ALSO LIKE:   WeMA BANK announces 108.3% growth in Profit Before Tax

All our sources are state employees and sought exclusion of their identities from this story — which was granted in line with our editorial policy on anonymous sources.

The apparent vacuum was reported over the weekend by Ogun News Express and the opposition Peoples Democratic Party followed with a statement that condemned the development as illegal, dangerous and unprecedented.

YOU MAY ALSO LIKE:   Defamation: Capt. Hosa Serves Notice On Edo State Government To Seek Redress In Court

“What Dapo Abidoun and his deputy have done is an embarrassment to the office and an insult to the people of Ogun,” rights activist Festus Ogun said in a message to The Gazette. “Their administration is setting a dangerous political precedent that seeks to outlaw the constitution and should be challenged.”

Mr Abiodun’s spokesmen did not return calls and messages seeking comments about their principal’s disappearance from Ogun, one of Nigeria’s most viable federating units with about six million people.

YOU MAY ALSO LIKE:   Bees attack mourners at Alaafin’s palace

A judicial workers’ industrial action crippled the state in September. Widespread protests have also enveloped the state over the deplorable state of the roads and the general decay of infrastructure.

On September 23, retirees and pensioners shut down the governor’s office seeking resolution on 10 years’ unpaid gratuities said to be accruing at N10 billion. Mr Abiodun was seen in a photo-op with ruling APC bigwig Bola Tinubu in London at the time of the protests.