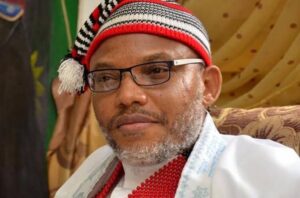 Ohanaeze Ndigbo, the apex Igbo socio-cultural organization, has slammed the Northern groups for placing a bounty on Nnamdi Kanu’s whereabouts.

DAILY POST had reported that 17 Northern groups under the aegis of Northern Consensus Movement (NCM) on Thursday declared Kanu wanted over the killings and destruction of properties owned by Northerners in the Southeast.

The President of the group, Dr Auwal Abdullahi, while addressing a press conference, also placed a N100m bounty on Kanu.

Reacting, Ohanaeze Ndigbo in a statement by its Secretary-General, Mazi Okechukwu Isiguzoro on Friday, faulted the move and accused the warring factions in the leadership of Miyetti Allah Cattle Breeders and Islamic terror organizations of being behind the killings and destruction of properties in the southeast region.

The group called on the Northern groups to place their N100 million bounty on Miyetti Allah and the slain Boko Haram leader, Abubakar Shekau’s successor whom it alleged had foisted heavy havoc on the citizens.

Ohanaeze Ndigbo, however, dismissed the claim that northerners are being killed in the southeast, maintaining that there had not been any killing of northerners recorded anywhere in the region as it further accused the northern groups of embarking on a mission to thwart the ambition of the southeast zone in producing President Muhammadu Buhari’s successor come 2023.

The Igbo organization said, “we would not want to join issues with faceless groups that are not known in the north but in as much as that they are making some attempts to cause crisis in the country by ensuring that the groups not only placing a bounty on Nnamdi Kanu over alleged killings, they are out to escalate the tension in the country.

“For the purpose of record and from the last time, there had not been any killing, except the accidental killing of Ahmed Gulak in Owerri. There had not been killing recorded anywhere in the southeast about northern people except some nefarious activities of unknown gunmen and killer Fulani herdsmen who had been attacking police stations and government facilities and killing both Igbos and indigenes from other parts of the country.

YOU MAY ALSO LIKE:   “Is this what this agbaya should be doing? - Omokri Blasts Buhari For Visiting Tinubu In London

“We want to tell the groups being sponsored by some northern presidential aspirants to place the bounty on the new leader of Boko Haram terrorist group, that had just emerged after the death of Shekau. Nnamdi Kanu has an address in London or in Germany where his headquarters of IPOB is. There is no need of searching for Kanu. He is not in Nigeria, he has an address in London as a British citizen. They should just use the N100 million bounty given to them by northern politicians, who are trying to destabilize the southeast to have easy root for the 2023 presidential ticket of major political parties in Nigeria, especially of the PDP.

YOU MAY ALSO LIKE:   Court Issues Trial Notice In FG’s Treason Charges Against Nnamdi Kanu

“They should place the bounty on Shekau’s successor who has no address, who is living in the forest, the terrorist group that took arms against the government for the last six years. They should not cry more than the bereaved, we will take care of the southeast and ensure normalcy returns. As far as we are concerned, that bounty is inconsequential and political. It is not necessary, only a means to continue to heat up tension in the polity”.