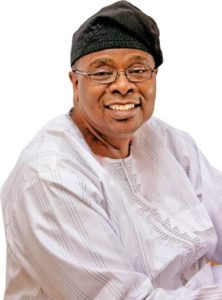 Gentlemanly, suave, highly cerebral are words that best describes Chief Adebukola Adetula, a man who has been destined for greatness since his formative years. Those who are close to him, will attest to the fact that; he is an angel in human form. If there is one thing he loathes so much, that will be the sight of his fellow human in distress, he is always ready to render assistance at all times.

Adetula is well grounded politically, most especially at the grassroot level, with his knowledge of the Ondo political terrain laced with his career exposure across the world. He is hell bent on making Ondo a better place for his people by placing it high in all ramifications among other state in the country. Junior Adetula, is indeed a chip of the old block, as his late father, Chief ZOK Adetula, popularly known as ZOKA was one of the foremost political leaders of the progressive family in Ondo State, whom under his watch, Bukola learnt the rudiments of politics before throwing his hat in the ring to contest gubernatorial in 2016.

YOU MAY ALSO LIKE:   Setback For Comoros As Goalkeepers, Coach Contract COVID-19 Ahead Of Match With Cameroon

ZOKA was a contemporary of Pa Adekunle Ajasin, former Executive Governor of Ondo State and a protege of the late sage and former premier of the defunct Western region, Chief Obafemi Awolowo. His father popularly called ZOKA, represented Owo constituency at the Federal House of Representatives between 1979 and 1983 before military Government took over power.

This is a clear indication that the Owo Born politician is born ready for the herculean task ahead with his “Credible Alternative Mandate”, as he jostle with the incumbent Governor Arakurin Akeredolu at the forth coming primary election. He is the favourites of many political elites and grassroots politician, whom have vowed to repay his kind gestures and goodwill for the state with a vote at the primary election to help him secure the ticket as the Gubernatorial candidate of the APC.

Ever since he announced his candidacy by throwing his hat in the ring once again, he has created a frenzy of excitement at the grassroots level. The U.S trained Criminal lawyer, formed a strong affiliation with the Unity Forum, under the leadership of Alhaji Ali Olanusi, a former Deputy Governor and serving Board of Trustees member of the APC. His influence has growed and fluttered across Ondo state like wild fire. Both the young and old are patiently waiting to have him as the parties flagbearer at the primariy election. They are all aware that ,he will bring hope and succour by restore the lost glory of Ondo State within a little space of time.

Political pundits in Ondo State avered that; “This years primaries election is not going to be an easy ride for Arakurin Rotimi Akeredolu like it was in 2016. Adetula has an edge over him because of his family pedigree at Owo. If you can remember vividly in 2016, Akeredolu and Adetula participated at the exercise that led to Akeredolu’s emergence as Governor. This time around, there are factors we can’t take away between the duo. They are both from Owo Kingdom, both are lawyers and are contesting under same party, APC.

This is a clear indication that the ring is open but Adetula has done his underground work and has gathered the support of the masses across Ondo with a tour to all the local government areas.”

Apart from his political resume, his personal career resume is quite an intimidating one. Bukola Adetula is a successful international businessman, who has his hands across many pies of business chains across the world like; Oil & Gas, Media, Law and Training.
He attended the prestigious Government College, Ibadan and thereafter travelled to the United States of America from where he received B.Sc. (Criminal Justice); B.A. & M.A. (Political Science) and a Juris Doctor (J.D) in Law, degrees.