One Dead As NDLEA Operatives Clash With Thugs In Lagos 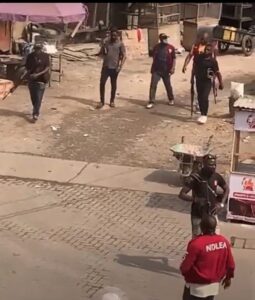 One person has been reported dead during a clash between operatives of the National Drug Law Enforcement Agency (NDLEA) and some hoodlums in Lagos Island.
Naija News gathered that the NDLEA officials engaged the thugs in a gun duel during a raid on camps of some drug peddlers in the area on Saturday morning.

It was learned that the officials of the anti-narcotic agency were trying to arrest and seize hard drugs when they were attacked by thugs.

YOU MAY ALSO LIKE:   Former Alpha Beta MD, Opara, files suit against Tinubu

This development comes days after some NDLEA officials arrested two singers, Zinoleesky and Mohbad from their residence in Lekki for being in possession of hard drugs.

Although they have been released, several Nigerians queried why they were manhandled and arrested without a warrant.

In a swift response on Friday, the agency’s spokesman, Femi Babafemi disclosed that the ID card of an NDLEA agent serves as an ‘arrest’ warrant.

Tags One Dead As NDLEA Operatives Clash With Thugs In Lagos