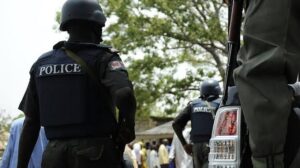 Operatives of the Nigeria Security and Civil Defence Corps in Osun State have arrested a housewife, Zainab for pouring hot water on her 11-year-old daughter after she refused to go on an errand.
An eye witness claimed that the mother who is a resident of Oke Oniti area of Osogbo, Osun State carried out her actions after her daughter refused to grind pepper which was to be used in preparing a meal.

It was also alleged that the suspect had the girl in her first marriage before she got married to her present husband.

Daniel Adigun, the NSCDC spokesperson for the Command confirmed the arrest of the suspect on Tuesday, January 18.

He said: “The woman was cooking when the incident happened. She injured the victim with hot water obviously out of frustration. We are proceeding with our investigation.”

In other news, two men, Chinedu Dioha and Joseph Emmanuel have been apprehended by the Osun State Police For allegedly stealing a car worth N15m.

The suspects who were paraded before newsmen revealed that they stole the vehicle from Lagos and took it to Osun to sell.

CP Wale Olokode, the state commissioner of police, said the vehicle was recovered from the suspects while they were trying to sell it at Molak, Ikire. Read more