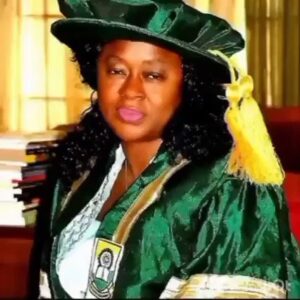 Government of Anambra has disclosed that an insulting statement made by Ngozi Chuma-Udeh, the commissioner for education, was provoked by an applicant’s “uncouth” language.

TRIXX NG recalls that there were reports over the weekend that there was chaos in Nnewi, one of the venues for the second phase of the teacher recruitment exercise examination, which held on Saturday.

A voice recording, which has now gone viral, is said to be that of the commissioner speaking to an applicant for the teaching position on the exercise.

“Madam, you’re an idiot. You mean the computers are doing what? I received a report by 12 noon that you people refused to stand in line; you refused to be identified; you mobbed and you were all trying to get into the hall at the same time,” the voice said.

“You refused to be disciplined, up till this moment. And you have the effrontery, you stupid woman, to call me on the phone to talk rubbish. Will you get out of my phone, you filthy thing?

“You really want to be a teacher? How will you tell your students to conform to instructions when you cannot stand in line and move into the hall? You came for a test that will make you a teacher and you’re behaving like hooligans.”

Listen to the audio here.

Reacting, the governor’s spokesperson identified as Christian Aburime via a statement said Udeh’s remarks were provoked by the language of the said applicant.

“While the applicants at the Nsugbe Center sat for and ended their own examination at about 4:00 pm, those at the Unizik Center ended theirs by 3:30 pm, with some candidates joining them from the IDK learning Center, Awka,” the statement reads.

YOU MAY ALSO LIKE:   DJ Cuppy Employed As BBC Radio Presenter

“Nnewi candidates did not commence their examination at the appropriate time owing to all manner of inappropriate conduct exhibited by some of the applicants. Not withstanding, they were eventually allowed to write the examination late in the evening.

“In respect to the video making the rounds on the social media space, members of the public need to be aware that it was an edited excerpt from a private phone conversation by an applicant who obviously failed the examination and out of frustration resorted to cursing and abusing the Governor of Anambra State, Prof. Chukwuma Charles Soludo, and the Commissioner for Education.

“The Commissioner’s comments were as a result of the uncouth language used by the applicant against the person of the Governor of Anambra State and other unprintable words hurled at the Commissioner.

YOU MAY ALSO LIKE:   Neymar On Target As Brazil Beat Paraguay Away From Home After 35years

“As public officers operating in the public space, the Commissioner has apologised for her inappropriate choice of words used in the said voice note.

“However, it is pertinent to reiterate that Governor Chukwuma Charles Soludo remains committed to the well being of Ndi Anambra and will not be distracted in availing deserving qualified teachers the opportunity to serve Anambra State and contribute in shaping the future of our children.

Still on the audio tapes of Anambra State Commissioner for Education…

We always expect so much from our public officers, but we are willing to give less.