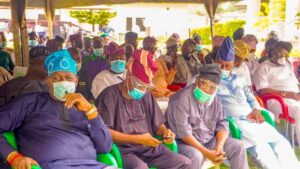 Things are getting hotter and spicier within the Oyo chapter of the All Progressives Congress with many veterans pushing buttons and pulling levers to take over the party’s leadership.

Camp loyalty has evolved into a collar for tying bewildered supporters to the wagon of the top contenders, especially Chief Adebayo Alao-Akala, Teslim Folarin and Chief Adebayo Adelabu.

The crisis in Oyo APC is being used as an anecdote to instruct young politicians on the necessity of unity within a party, especially when the governor of that state belongs to the opposition.

Reflective of the idea that a house divided against itself cannot stand, the influence of the APC in Oyo is as shaky as it has ever been. And that is because of the power struggle.

There is also Senator Teslim Folarin, who joined APC (from PDP) alongside Alao-Akala in 2017. He has been criticised for reaching above his station since he is a newcomer relative to the old hands that have championed the party for donkey years.

Of course, there is no forgetting former Deputy Governor Adebayo Adekola Adelabu, who has announced time and time again that there is no power struggle in Oyo APC but appears to have thrown his weight behind Chief Alao-Akala. Nevertheless, certain folks appear to be considering him for the hot seat of leadership.

Political analysts have noted that this struggle might ultimately result in more fractures within the administrative framework of the party. After all, those loyal to the former party leader, the late Senator Abiola Ajimobi, are still much around, seemingly without a leader.

YOU MAY ALSO LIKE:   ‘I’m better prepared than the first time’ — Dele Momodu says as he joins 2023 presidential race

Thus, although Alao-Akala appears to be the most popular candidate, he is also the most unpopular with certain elites in the party. Or so the reports claim. Folarin and Adelabu are not just sitting still, unsurprisingly.
Thus, the drama continues.

Previous There Will Be No Election In Yorubaland In 2023, Says Igboho
Next EU Set To Hold Urgent Video Talks Over Escalating Israel-Palestinian Fighting On Tuesday