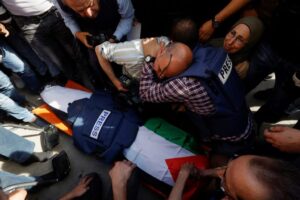 An Al Jazeera journalist, Shireen Abu Akleh, was killed at her point of duty covering Israeli raids in the occupied West Bank.

The news network confirmed the incidence to AFP, describing the shooting of the Palestinian-American journalist as a deliberate act by Israeli forces.

A colleague of the deceased, Ali Samoudi, who also spoke to the French news agency said “We were going to film the Israeli army operation and suddenly they shot us without asking us to leave or stop filming.

“The first bullet hit me and the second bullet hit Shireen… there was no Palestinian military resistance at all at the scene,” Samoudi said.

The news network has called on the international community to “condemn and hold the Israeli occupation forces accountable for deliberately targeting and killing our colleague,” suggesting they may “try to cover up their crime.”

The fatal shooting comes nearly a year after an Israeli air strike destroyed a Gaza building that housed the offices of Al Jazeera and news agency AP.

Responding to the murder allegations, Israeli authorities claimed Palestinian gunmen had opened fire at the time Akleh was struck, adding that it is investigating the possibility that she was shot by Palestine gunmen.