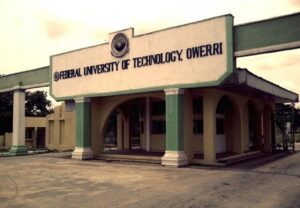 Students and staff of the Federal University of Technology, Owerri (FUTO) in Imo State on Tuesday avoided the main entrance of the school over a coffin that was dumped there.

They took alternative routes to avoid the object.

It could not be confirmed who dumped the coffin, but sources said it could be members of one of the communities that have been at loggerheads with the institution of a land.

Some palm fronds were also placed at the school gate, apparently to warn the management to steer clear of the disputed land.

A source said: “We woke up this morning to see that thing there. “We do not know who placed it, but some people have told us that it is one of those communities in dispute with the school over the school’s land.”

YOU MAY ALSO LIKE:   Ecobank is "Agric Lender of the Year 2020" - BAFI Awards
Panic As Unknown Person Dumps Coffin at FUTO gate 2021-12-07
Oluwasegun Adesuyi
Share