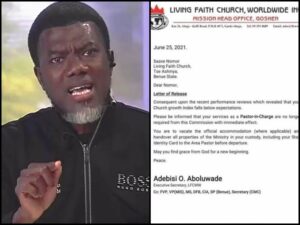 Winners’ Chapel is currently receiving backlash and condemnation amid the trending video released by a man that identify himself as a pastor in the ranks of the Living Faith Church popularly known as Winners’ Chapel, who claimed he was sacked because he’s not generating money for the church and this has led to the usual antagonists of Bishop Oyedepo like self acclaimed online preacher Daddy Freeze to weigh in his strong criticism.

YOU MAY ALSO LIKE:   Ecobank To Support Creation of Agric Technology Hubs Across Nigeria

While all these are going on popular author and opinion leader has lend his voice to the issue through a post on his Instagram handle @renoomokri where he defended the position of the leader of Winners’ Chapel on the sack.

The statement according to Omokri reads; “I read the letter from Winners’ Chapel and it did not mention anything about money. Rather, it used the word “church growth”. Christ called us to engage in evangelism-Matthew 28:18-20. Any pastor that fails at that core duty should be sacked. This is what Christ told us in Matthew 25:14-29.

“The sacked pastor who went to the press after releasing a live video is playing on your emotions. He is not considering that he is undermining the faith of believers.

“In John 15:16, Christ said “I chose you and appointed you that you should go and bear fruit.” Now, ask yourself what the consequence of not bearing fruit is. Christ answered that question in John 15:2 “Every branch in Me that does not bear fruit He takes away”.

YOU MAY ALSO LIKE:   Tinubu congratulates Daniel Okoh, new CAN President

“This is why the only thing Christ ever cursed in His lifetime on Earth is the fig tree that bore no fruit-Mark 11:14.

“Winners Chapel is in order.” The bestselling author concluded.

@societygazette
Previous Eid-el-Kabir: Speaker Obasa pleads with Nigerians to let peace reign
Next Reactions As Ram With 5 Horns Is Spotted In Lagos Market Ahead Of Sallah Celebration