Home / cover / PDP Crisis: ‘I Am Not Your Mate’ – Okupe Scolds Wike

PDP Crisis: ‘I Am Not Your Mate’ – Okupe Scolds Wike 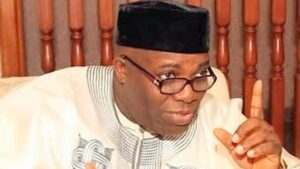 A former presidential aide, Doyin Okupe, has slammed Governor Nyesom Wike of Rivers State, declaring himself a leader and senior to the incumbent governor.

Okupe was reacting to a recent public attack on Prince Uche Secondus, the National Chairman of the main opposition party.

Naija News reports that Governor Wike had during the last weekend described Secondus as a serial liar and one that could not be taken for his words.

Secondus, who also attended the event, stormed out after delivering his speech wherein he talked about character and good leadership.

Reacting in a series of post on his Twitter page, Okupe asked the Rivers State Governor to apologise for his outburst.

“I have observed that there are too many anomalies and practices which are alien to party politics which are being thrown to the upcoming young ones as the norm,” Okupe wrote.

In another post later, Okupe said he has the right to call derailing members of the Peoples Democratic Party, PDP, to order as a senior member of the party.

YOU MAY ALSO LIKE:   World Bank Suspends Nigeria’s SoftTech IT Solutions, MD For Bribery

Okupe who was a former aide under ex-President Olusegun Obasanjo and Goodluck Jonathan boasted that Wike is not his contemporary in politics.

“I believe I have the right and the merit to call our members to order irrespective of their status in the party,” Okupe stated in a statement he shared on the micro-blogging platform, Twitter.

YOU MAY ALSO LIKE:   Zenith Bank GMD, Onyeagwu Emerges “CEO of the Year” as Zenith Bank Wins 'Most Responsible Organisation in Africa' at SERAS CSR Africa Awards 2021

According to the PDP chieftain, those who can wade shoulders with him in politics in Rivers State are the likes of Peter Odili, Rufus Ada George and not Wike, adding that he is a leader and senior to the current governor.

Okupe added: “For a fact, my contemporaries in the political hierarchy of Rivers State are former Govs Rufus Ada George and Peter Odili. So I am a senior and leader to our indefatigable Gov Wike politically.

YOU MAY ALSO LIKE:   Brazilian footballer arrested, Charged with Attempted Murder for nearly killing referee

“Therefore, I consider it a duty to intervene at this juncture,” he said.

Tags PDP Crisis: ‘I Am Not Your Mate’ – Okupe Scolds Wike