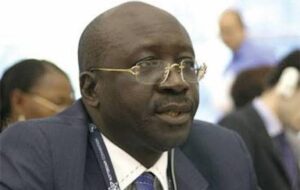 The Peoples Democratic Party, PDP, may be sinking into deeper crisis following revelation that, Iyorchia Ayu, its National Chairman, has been suspended.

But in a quick response, the party in a statement signed by Debo Ologunagba, its spokesman, said it’s “fake news.”

The statement said, “The attention of the National Working Committee (NWC) of the Peoples Democratic Party (PDP) has been drawn to a fictitious report being circulated in a section of the social media suggesting that the National Chairman of our great party, His Excellency Sen Dr lyorchia Ayu, has been suspended by the NWC

“Such report is completely false and a product of the imagination of mischief makers with the intent to destabilize our Party, create an impression of crisis within our ranks and mislead the unsuspecting members of the public.”

It added, “It is clear that the false report is the handiwork of vicious anti-people forces who are agitated by the stability, unity and soaring popularity of our Party under the cohesive Sen Dr. Ayu led National Working Committee as well as the intimidating statures of our Presidential and Vice Presidential Candidates His Excellency, Atiku Abubakar and His Excellency, Sen Dr.Ifeanyi Okowa respectively.”

Clarifying, the statement said, “Our National Chainman Sen Dr lyarchia Ayu is on a short vacation outside of the country and he officially transmitted power to the Deputy National Chairman (North) His Excellency Amb. Umar Iliya Damagum, to perform his duties in Acting Capacity pending his return in line with the provision of the Comititution of the PDP 2017 (amended).

The statement said the Independent National Electoral Commission (INEC) was duly informed on the absence of our National Chairman and that Damagun will be performing the duties of the National Chairman in Acting capacity pending Ayu’s return.

While stating that Ayu remains the National Chairman of the party, it urged all members and supporters to disregard the said report as “fake news.”

YOU MAY ALSO LIKE:   Nnamdi Kanu Sues FG For N50bn Over Human Rights Violation

The uneasy calm in the party since the conclusion of its presidential primary and the selection of the party’s running mate has given way to open display of hostility as 2023 elections drag closer.

Meanwhile, former Ekiti State Governor, Ayo Fayose, on Wednesday also hinted that some aggrieved stakeholders of the party may head to court to seek the removal of Atiku as the party’s presidential candidate.

YOU MAY ALSO LIKE:   Pastor Leke Adeboye In trouble, Faces Panel For Calling RCCG Pastors Goat

He said the PDP’s constitution provides for rotational presidency just like the Nigerian Constitution.