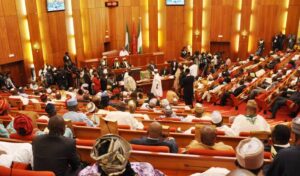 The Senate PDP caucus communicated this decision in a letter addressed to the Senate President, Ahmad Lawan, by the party’s national chairman, Iyorchia Ayu, on Tuesday.

Bwacha had dumped the party for the ruling All Progressives Congress (APC) on Thursday.

“The PDP Senate caucus has duly informed the National Headquarters of the party, in view of which we so communicate to you. We believe that Lau will be an asset to the leadership of the Senate. Thank you and accept the assurances of our highest regards,” read part of Ayu’s letter.

Bwacha had hinged his defection from the PDP on the “huge division and factionalisation” of the opposition party in his state.

“I had to leave because I seek to breathe better. This day, I announce henceforth my exit from the PDP, and to join the governing party because of the visible presence of the party in my Senatorial District,” the senator had told President Muhammadu Buhari when he visited the State House to formally inform him of his defection.

Bwacha’s defection had brought the number of APC Senators to 70, while the PDP has 38 and the Young Progressives Party (YPP) has only one.