Peter Obi has been named in a global money laundering scandal 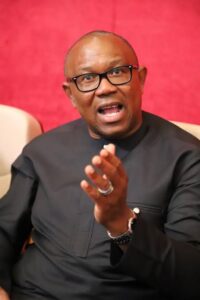 Peter Obi has been named in a global money laundering scandal

The former governor set up secret companies abroad and refused to declare them as part of his assets.

A former Governor of Anambra State, Peter Obi, has been named in a global tax evasion scandal and investigative reporting carried out by more than 600 journalists in 117 countries.

The investigation is called Pandora Papers.

The BBC writes that the “Pandora Papers is a leak of almost 12 million documents that reveals hidden wealth, tax avoidance and, in some cases, money laundering by some of the world’s rich and powerful.”

The Pandora Papers details how rich and powerful individuals from across the world– including more than 330 politicians from 90 countries–launder money by setting up businesses in tax havens like the Cayman Islands, the British Virgin Islands, as well as in countries like Switzerland and Singapore.

These places are called ‘tax havens’ because it is easy to set up companies there, there have laws that make it difficult to identify owners of companies and there is low or no corporation tax within their jurisdictions.

According to Premium Times, a Nigerian publication that was part of the global investigation under the International Consortium of Investigative Journalists (ICIJ) umbrella in Washington DC, Obi discreetly set up a company called Gabriella Investments Limited, in the British Virgin Island.

YOU MAY ALSO LIKE:   BREAKING! 10 deaths recorded as Pastor David Ibiyeomie’s Church Collapses

He named the company Gabriella Investments Limited, after his daughter Gabriella Nwamaka.

Obi, the online newspaper reports, first approached Acces International, a secrecy enabler in Monaco, France, to help him incorporate an offshore entity in one of the world’s most notorious tax havens.

On the same day the company was incorporated, the nominee directors met and issued 50,000 shares of Gabriella Investment in favour of Hill International Holding Corporation, a shell International Business Company operating under the laws of Belize, another tax haven.

The director of the company is Mr. Van Vuuren, who is also one of the directors of Gabriella Investment.

YOU MAY ALSO LIKE:   You Can't Overtake Without Overtaking So Overtake !!! Esther Osaji ...

Obi has also created a trust known as The Gabriella Settlement, an entity also registered in the BVI.

The Gabriella Settlement is the sole shareholder of PMGG Investments.

Obi also incorporated another company called Next International (UK) Limited on May 16, 1996, in London.

Investigations show that Obi continued to act as director of Next International (UK) Limited for 14 months after becoming Governor of Anambra State, thereby breaking Nigeria’s laws.

In Nigeria, a person is statutorily obligated to withdraw from engaging in or directing a private business, upon becoming a public officer, as stipulated in Section Six (6) of the Code of Conduct Bureau and Tribunal Act.

Obi resigned from Next International on May 16, 2008, 14 months after he assumed duties as Anambra Governor.

YOU MAY ALSO LIKE:   So Sad! Pastor Taiwo Odukoya Bereaved Again, Loses Twin Sister To Cancer

Obi also contravened Section 11 of the 1999 constitution (as amended) which stipulates that public officers are required to declare “immediately after taking office and thereafter all” their properties, assets, and liabilities and those of his (or her) unmarried children under the age of eighteen years.

Investigations have revealed that Obi did not declare the companies he tucked away in offshore secrecy havens to the Code of Conduct Bureau.

Asked about his offshore assets and shell companies, Obi told Premium Times that: “I am sure you too will not like to pay inheritance tax if you can avoid it.”

Obi, 60, was PDP’s vice presidential candidate in the 2019 general elections.

He also once told the world that he wears only one wrist watch, even though images of him at different events showed him wearing different brands of pricey wristwatches.