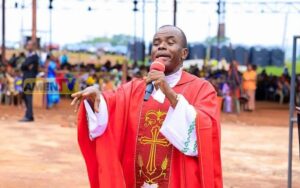 Labour party presidential candidate, Peter Obi has reacted to the embattled Reverend Father Ejike Mbaka’s accusation of him being stingy.

The former governor of Anambra state during an interview with Rufai Oseni revealed that he bore no grudges toward the clergyman.

Recall that Mbaka during an outburst in a midweek service in his church stated that Peter Obi was too stingy to become the president of Nigeria and insisted it was better to have an old man as president instead of a stingy one.

This statement was followed by a lot of backlashes which led to a ban stopping all catholic faithful from attending Mbaka’s parish.

However, Obi has stated that despite Mbaka’s angst towards him, he listens to the clergyman when he speaks and described him as a father.

Previous Mbaka Distances Self From Protest, Urges Faithful To Respect Bishop
Next BREAKING: Sanwoolu reacts to Attack on Tinubu’s Convoy, reveals next line of Action