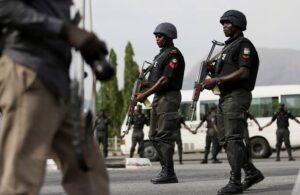 No fewer than six persons including a Nigerien who supply fuel and breads to bandits have been arrested by operatives of police in Katsina state.

Confirming the development, Spokesman, Katsina State Police Command, SP Gambo Isah said the persons were arrested at various points while on their way conveying the products to the bandits in the forest.

SP Isah said, “Based on credible intelligence, the command on the 18/9/2021 succeeded in arresting one Lawal Shu’aibu (32-year-old) of Maradi, Niger Republic, Sani Lawal (28-year-old), Abdulrashid Garba (50-year-old) and Tigal Haruna (57-year-old) all from Katsina State conveying fuel in their vehicles.

“Nemesis caught up with the suspects when they were arrested long Katsina – Jibia road while on their way into the forest.

“In the course of investigation suspects confessed to be selling the fuel at fringes of the forest, contrary to Executive order and other extant laws of the Federation.

“On same day, the command also succeeded in arresting one Shafi’u Haruna (25-year-old), a suspected supplier of fuel to bandits in the forest.

“The suspect was observed to have been frequently coming to buy fuel at a filling station in Dandume and after a while he will come back to buy again in his motorcycle Jincheng rubber, white in colour.

“In the course of investigation, suspect confessed to the commission of the offense and further stated that he came all the way from Sabuwa Local Govt Area to buy the fuel and take to the forest.

YOU MAY ALSO LIKE:   2023: Northern Youths Stage Rally To Endorse Emefiele For President

“Similarly and on same day, the Command succeeded in arresting one Hamisu Sani (30-year-old), a notorious informer who specializes in supplying bread to bandits in the forest.

“After several warning by both community leaders and security agencies to stop supplying bread to bandits in the forest, nemesis caught up with the suspect when he was arrested with some quantity of bread concealed inside a sack while trying to enter into the forest and take it to bandits.

YOU MAY ALSO LIKE:   IGP Posts Idrisu Dauda Dabban To Katsina State As New Police Commissioner

“In the course of investigation, suspect confessed to the commission of the offense,” the Police Public Relations Officer, SP Isah however stated.